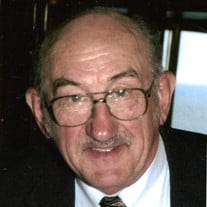 Daniel C. Johnson, Woodruff, passed away on Sunday, July 15, 2018. A former long time resident of Tomahawk, he was 80 years old. Born in Hurley, WI, in 1937 to William C. and Rita (DeRosso) Johnson, he graduated from the J.E. Murphy HS, in Hurley, WI. A veteran of the US Navy, in addition to other assignments, he served aboard the destroyer USS Harlan R. Dickson during the Suez Crisis of 1956, where his ship assisted in the evacuation of American citizens from Haifa, Israel, as the Israelis and Egyptians fought for control of the canal. He was a long time member of the Minocqua American Legion, Post 89. Upon honorable discharge from military service, he enrolled at the UW Superior. Graduating with a Bachelor’s Degree in education in 1961, he began his work career at the Ondossagon High School, Ashland, WI, teaching English and Spanish. Relocating to Tomahawk in 1964, he was employed at the high school teaching Spanish and coaching various sports including football, wrestling and baseball. A highly successful baseball coach, in addition to winning numerous conference championships, on two occasions his teams lost their only game of the season at the state quarter-finals. Upon completion of his Master’s Degree in guidance and school administration in 1968, he became the guidance counselor at the Tomahawk Junior HS, serving as their first counselor. Reassigned to the position of high school guidance director in 1973, he served 18 years as an administrator and guidance counselor for the Tomahawk HS retiring in 1991. Upon retirement from the school district, Dan began a second work career as a field supervisor for the US Department of Labor managing the “Green Thumb” senior work program in Northeastern WI. Assigned the task of assisting elderly citizens in their efforts to find meaningful employment, in 1993, he received special recognition on a national level for exceptional achievement in job placement of needy elderly Americans. Retiring from the work force in 1995, he and wife Loretta traveled throughout much of the world. A visit to ‘Machu Picchu’ in Peru, and a journey down the Amazon River in Brazil, were two of his fondly recalled special ventures. A long time member of the Bradley Township governing board in Lincoln County, he devoted much of his efforts as a board member to the development of various community projects including the planning and development of Theisen Park in Heafford Junction. He also served as a volunteer little league baseball coach for many years. Additionally, he was an active member of many local and state civic and academic organizations, most often serving in a leadership role. A carpenter and all around handyman, Dan took special delight in doing it for himself. During retirement, he and Loretta resided for many years in their self-built home in Harshaw, on the shores of Heiress Lake, where “Papa” experienced the love and special joy of spoiling his grandkids during frequent family outings. For many years during retirement, he and Loretta made their winter home at a senior resort in Pharr, Texas, in the Rio Grande Valley. A long time “Winter Texan”, in addition to square dancing, frequent golf outings and lengthy sessions playing billiards, he also served as a volunteer teacher, teaching Spanish and memoir writing to other senior retirees. A lifelong resident of northern Wisconsin, he took special satisfaction in living in the north woods. In addition to hunting and fishing, he especially enjoyed kayaking the many tranquil, pristine waters of Vilas and Oneida counties. A cancer survivor, confronted with persistent health issues, he and Loretta gave up their home in Harshaw and relocated to Woodruff in 2015. In addition to Loretta, his wife, best friend and traveling companion for 60 years, he is survived by two children, Keith (Linda) Johnson of Tomahawk, and Katherine (Michael) Larsen, of New Bern, North Carolina. He is further survived by a sister, Sandra, and husband, Terry Tadyzck, of Milwaukee; a sister-in-law, Joan Johnson of New Mexico and brothers-in-law, Ervin Kaste of Big Flats, WI and Richard Daul of Simi-Valley, CA. Other survivors include 7 grandchildren and 4 great grandchildren. He was preceded in death by his parents; brother, Kenneth Johnson and sister, Audrey Kaste. In accordance with Dan’s wishes, cremation will take place. A private family memorial will be held at a later date.

Daniel C. Johnson, Woodruff, passed away on Sunday, July 15, 2018. A former long time resident of Tomahawk, he was 80 years old. Born in Hurley, WI, in 1937 to William C. and Rita (DeRosso) Johnson, he graduated from the J.E. Murphy HS, in Hurley,... View Obituary & Service Information

The family of Daniel C. Johnson created this Life Tributes page to make it easy to share your memories.

Send flowers to the Johnson family.