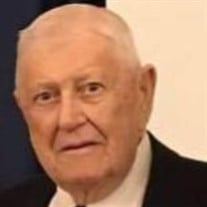 Bill E. Schumann, passed away on August 31, 2021 at the Bay at NuRoc Health Services in Blackwell, WI. He was born June 20, 1931. Bill served as past president of the Wisconsin Snowmobile Club and also in Illinois. He also served his country as a pilot in the United States-Air Force. Few people, if any, can provide as long a list of accomplishments, office held, programs founded, clubs developed, challenges conquered and awards received than Bill Schumann. His snowmobile journey started in Illinois where he helped to unite 90 snowmobile clubs into the Illinois Association of Snowmobile Clubs (IASC), where he served five terms as President. His many programs there included receiving $67,000 in grand monies for their trail system, a state trail map, assistance for club operation and maintenance costs of groomers and chairing the 1993 ISC in Illinois. In 1992, Bill was inducted into the Iron Dog Brigade and has served several officer capacities with that organization. In 1997, he was honored by induction into the IASC Hall of Fame. Bill’s penchant for preserving old sleds of the sport was evident when he became a charter member of the Antique Snowmobile Club of America and served as its President in 1993. He coordinated the club’s reenactment of the first Eagle River Derby race. His honors continued when in 1995 Bill was honored as the United States Snowmobiler of the Year, the ASCOA Distinguished Service Award and the Harry Knoll Award for outstanding service. Bill moved to Manitowish Waters in 1998 and quickly continued his involvement in organized snowmobiling becoming treasurer of the Association of Wisconsin Snowmobile Clubs and then its President from 2008 – 2010. In 2016, the Manitowish Waters Snowmobile Club dedicated a major bridge crossing as the “Bill Schumann Bridge” with a plaque in his honor for all of his dedication to the sport of snowmobiling. He is a charter director of the International Hall of Fame and has served as its President until retirement. Bill’s unselfish dedication to the sport of snowmobiling has brought him many honors and in 2018 he was the recipient of the Edgar Hetteen Award of Merit. Bill was proud to have served his country as an Air Force Pilot in the USA Air Force. Along with his passion for snowmobiling, Bill was also an avid Chicago Blackhawk and Chicago Bears fan. He is survived by his three sons, Bill Jr., Bryan and Brad, and grandchildren, Bill Jr., Amanda and Bradley. Services will be held at the Trinity Lutheran Church in Boulder Junction on Saturday, September 11, 2021 at 11:00 AM. Visitation will take place at Bolger Cremation and Funeral Services- WOODRUFF CHAPEL on Friday, September 10, 2021 from 5:00 - 7:00 PM. Memorials may be directed to: ISHOF, 1521 N. Railroad St., Eagle River, WI 54521 or via PayPal at www.ishof.com

Bill E. Schumann, passed away on August 31, 2021 at the Bay at NuRoc Health Services in Blackwell, WI. He was born June 20, 1931. Bill served as past president of the Wisconsin Snowmobile Club and also in Illinois. He also served his country... View Obituary & Service Information

The family of William E. Schumann created this Life Tributes page to make it easy to share your memories.

Send flowers to the Schumann family.