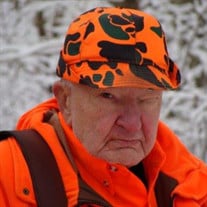 William John Hansen born September 19, 1928 in Fond du Lac, Wi died December 27, 2017 at Howard Young Medical Center in Minocqua, Wi. He was preceded in death by his parents, Norman A. and Alice M. Hansen (nee Kissinger), his uncle and aunt, Erick E. Erickson and Doris E. (nee Kissinger), his wife, Mary Louise Katherine (nee Bloczynski), a brother, Vern K. Hansen and an infant sister, Jean Hansen. He is survived by his son Douglas W. (Cheryl), two granddaughters, Kathryn E. (Brian Stough) Hansen and Ellen A. Hansen, two brothers, Donald J. (Linda) Hansen, Richard N. (Mary Jane) Hansen, nephews Allen (Denise) Hansen and Keven Hansen, sister-in-law Elizabeth (Peter) Gress, cousin Nick (Lori) Hansen and many other nieces and nephews. Bill graduated from Marshfield Senior High in 1946 and from Wisconsin State College in Stevens Point in 1957 with a BS in Secondary Education. He was a National Honor Society Member. Bill played trumpet in the Drum & Bugle Corp during high school and continued playing in local polka bands and dance bands into the mid 1950’s. He served in the U.S. Army from 1951-1952 as a frontline medic in Korea and then was in the Army Reserve until November 1956. He married Mary Louise Bloczynski on August 18, 1956 in Athens, WI. Doug was born in 1957 and Bill taught school in Brillon, WI and Black Earth, WI before moving to Madison in 1958. Bill worked for the Wisconsin Dept. of Agriculture, Trade and Consumer Protection in the Division of Food Safety from 1958 until retirement in 1992. During those years he served as a Dairy Inspector, then the Agricultural Markets Supervisor for the Dairy and Food Division, the Supervisor of the Division’s Grade A Milk Inspection Program, the Bureau Director for the Bureau of Food Inspection, and then was the Compliance Director for the Food Division (n/k/a Division of Food Safety) from 1981-1992. Bill was an avid outdoorsman, he loved bluegills on a fly rod and hours spent casting for muskies. He spent many years duck and goose hunting with his brothers in the central and northern portions of Wisconsin. He started deer hunting with his grandfather on the family farm at an early age and continued up through the 2017 season missing only two seasons that entire time. He loved fall bird hunting and was a tremendously accurate wing shot. He was an active member of the Minocqua Gun Club shooting in both the club league and the summer traveling league. He routinely was capable of shooting a perfect round. He was a life member of the National Rifle Association and proud to be a Golden Eagle member. Bill was initiated as a Mason in April 1950 and became a Master Mason in July 1950 with the Marshfield Lodge #224 and after retirement was an active member of the Island City Lodge #330. He became a Noble of The Mystic Shrine in the Madison Zor Temple in December 1978 and after retirement was a member of the Northwoods Shrine Club. He served as the president of the Northwoods Shrine Club in 2011. Bill and Mary Louise moved to Minocqua in 1997. They loved living here full time as they had been coming to the old family cottage on Lake Tomahawk for years. Bill enjoyed life in the north woods and was always ready to take friends and family out fishing and hunting. He loved it when Doug, Cheryl, Kate and Ellie were up and when Brian started coming he enjoyed taking Brian hunting and talking fishing, hunting and guns. Jake, Ollie and Bowie, the family dogs will miss the “Ice Cream Man” as he would have a bowl of ice cream every night and feed them each a large bowl of ice cream every night when they were up north. Doug and family want to Thank Dr. Tom Gabert for his friendship and care over the last twenty years. We also want to thank the medical staff at Howard Young Medical Center for their compassionate care during Bill’s final days. According to his wishes, he has been cremated and a celebration of his and Mary Louise’s life together will be held at a later date. Memorials can be made in his name to Shriner’s Hospitals for Children (shrinershospitalforchildren.com).

The family of William J. Hansen created this Life Tributes page to make it easy to share your memories.

Send flowers to the Hansen family.