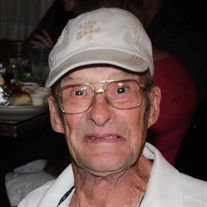 William F. Bassett September 8, 1928 – December 12, 2019 Our father, grandfather, brother, uncle, cousin and good friend passed away peacefully on December 12, 2019 in Woodruff, Wisconsin. Bill (nicknamed Homer) was born September 8, 1928 and a lifelong resident of the Minocqua area. Bill and his wife, Lois (McGregor), purchased land in 1965 and built their home on South Blue Lake in Hazelhurst. They were married 53 years until Lois’ death in 2013. Bill was proud to be a founding member of the Min-Aqua Bats waterski club and their first president. He used to tell stories of how he and the other members would perform deep water starts off the roof of the boathouse (now The Thirsty Whale). They would ski on anything they could find including ping pong paddles, canoe paddles, pieces of plywood, or their bare feet. They built ski jumps, and created skis, bindings and the “saucer” - the round plywood disc - which is still used in shows today. The town’s people would gather to watch their performances – this was the start of the Min-Aqua Bats show that exists today. Bill worked as the head custodian for the MHLT Grade School until his retirement. He had the gift of remembering students’ names, and could recall names years later when he would see the former students. Bill was known for his vigilance in the cafeteria and would frequently comment to the students when they were disposing uneaten food before returning their lunch trays. “So you’re not going to eat that carrot stick…” Perhaps we formed better eating (or over-eating?) habits because of Bill. Bill was active during retirement making wood bowls from the burls of trees and being the sole proprietor of “Bill’s Bowls.” Throughout his life, Bill was an avid outdoorsman - he loved fishing, hunting and camping. He would cast his fishing line into a mud puddle if he thought there was a remote chance of catching anything. He was a great story-teller, cribbage player, and likely the best, unofficial ambassador for Minocqua. Above all, he was kind, generous and always willing to help others. He is survived by his daughter Victoria Golec of Decatur, Alabama and son Andrew of Tigard, Oregon; granddaughters Brenda DiVincenzo of Fort Worth, Texas and Kathleen Bassett of Edinburgh, Scotland; and sisters Alice Chase, Edna Pottratz and Martha Krejci. There will not be a funeral service, but a get-together to remember Bill is being planned. The family wishes to thank Laurie and Jim Dolan, and Sam Patterson for their loving care and incredible friendship over the years. Additionally, the family would like to express their appreciation to the Seasons of Life Hospice House for their compassionate care.

The family of William "Bill" F. Bassett created this Life Tributes page to make it easy to share your memories.

Send flowers to the Bassett family.