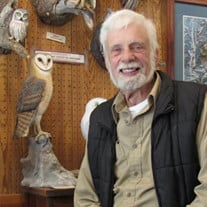 Wiley Robert Miller, a nationally renowned artist/woodcarver, taxidermist, dedicated Marine, loving father and 30-year-long beloved resident of Boulder Junction, Wis., died on October 29, 2020, at the age of 84 at his home after a courageous battle with cancer. Wiley is survived by his children, Pamela Miller, Susan Miller-Crane (Steve), Jeffrey Miller (Julie Henningfield) and Timothy Miller (Cheri Serletic); his grandchildren, Dylan Ringer (Autumn Feith) and Ashley Weber (Aric); his great-grandson (Declan Weber); his siblings, Margaret Hawkins and Diane Wuttke (John). Further survived by cousins, nieces, nephews, other relatives and many dear friends. He is preceded in death by his parents Robert and Selma (Sally) Miller; his wife, Marlene (Pavlovich); and his siblings Jerald W. Miller; and longtime companion Betty Musselman. Born in South Milwaukee on April 16, 1936, Wiley spent most of his adult life in the Wind Lake/Tichigan area of Southeastern Wisconsin. Proud patriot and U.S. Marine, Wiley served his country as a tank commander and dedicated four years. He married Marlene Pavlovich, raising four children until her passing in 1986. Throughout his prolific career, Wiley was known for his detailed woodcarvings, illustrations, acrylic paintings and taxidermy. For 30 years he painted cover art for Fishing Facts magazine. When it came to his talent, Wiley often said, “We were all put on God’s earth to do something.” He was an avid hunter, fisherman, who enjoyed every aspect of the great Wisconsin Northwoods. Wiley will be fondly remembered not only for his keen perception for nature, but also for his colorful fishing stories and quick wit. He greeted everyone with a smile and made a lasting impression on everyone he met. He was a revered member of the Boulder Junction community, leaving a legacy that won’t be forgotten. A community memorial service is being planned for Sunday, November 29, at Community Church of Boulder Junction after church services. In lieu of flowers, the family has requested donations in Wiley’s name to the American Cancer Society. A special thanks to Ascension Hospice Services for their attention and care.

The family of Wiley Miller created this Life Tributes page to make it easy to share your memories.

Send flowers to the Miller family.