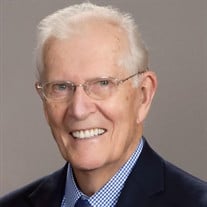 Walter A. Andrus, DDS Dr. Walter Andrus, long-time Minocqua resident, was born in Rhinelander WI on September 25th, 1928 to Milton E. and Esther A. (Abendroth) Andrus. He went to his heavenly home on September 10th, 2019 at the age of 90. Walter attended Zion Lutheran grade school; Rhinelander High School, graduating in 1946; and Marquette University School of Dentistry, graduating in 1953. He served in the US Army Dental Corps for 2 years; including 16 months in Korea. He then opened a dental practice in Wausau WI, where he practiced for nearly 10 years. Walter and Virginia Brooks were married on April 28, 1962. In 1965 they moved to Woodruff where he practiced dentistry for 30 years and retired in 1993. He was a life member of the American Dental Association and Wisconsin Dental Association Omicron Kappa Upsilon honorary Dental fraternity and Delta Sigma Delta fraternity. Walter was an active member of Trinity Lutheran Church in Minocqua for 54 years where he served his Lord with gladness. He loved travel, the out-of-doors, and all seasons of the year. Fishing, ice fishing, hunting, wine making, picking berries or mushrooms or just walking in the woods were some of his favorite things to do. Walter is survived by his wife of 57 years Virginia, daughter Amy (Scott) Priddy, St. Louis Park MN, sons John Andrus, Minneapolis MN and Dr. David (Le) Andrus, Colonel USAF-Colorado Springs CO, brother James, Menomonee Falls WI, and sister Carol, Land O’ Lakes, WI. He is also survived by his dear granddaughters Kaitlin (Mike) Cernak and Laura Priddy, great grandson Benjamin Cernak, and numerous nieces and nephews. He was preceded in death by his parents and sisters Lois Silverman, Elaine (Vincent) Paris, brother-in-law Herbert Kuehling, and sister-in-law Margaret Andrus. Funeral services will be held Saturday September 14th at 11:00 AM at Trinity Lutheran Church in Minocqua. Visitation one hour prior to service. Interment at Sunset Memorial Gardens after service, followed by luncheon at the church. Memorials preferred to Trinity Lutheran Church of Minocqua, WI.

Walter A. Andrus, DDS Dr. Walter Andrus, long-time Minocqua resident, was born in Rhinelander WI on September 25th, 1928 to Milton E. and Esther A. (Abendroth) Andrus. He went to his heavenly home on September 10th, 2019 at the age of 90. Walter... View Obituary & Service Information

The family of Walter A. Andrus, DDS created this Life Tributes page to make it easy to share your memories.