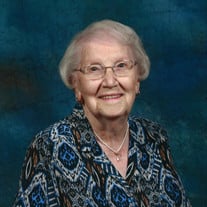 Viola Pipho Haeseker entered her eternal home on July 23, 2021 at the age of 105. Viola (Vi) was born Nov. 7, 1915 in a farm house near Sumner, Iowa to Herman and Anna (Steege) Kuker. She attended St. Paul’s Christian Day School, a one room school taught by the Pastor, and Sumner High School, receiving a teaching certificate to teach in grade school. In 1937 she married her best friend, Malwin Pipho. The lived on a farm outside of Sumner, IA where they and had six children, five of whom were born at home. The family moved to Ft. Morgan, CO in 1953. They became active members of Trinity Lutheran Church where Vi served in the Ladies Guild, LWML, Fellowship Society, Altar Guild, and Good Shepherd Auxiliary. She very seldom missed her Bible Study opportunities. While raising her family, Vi worked at the local hospital as a nurse aide and surgical nurse. When in 1975 Malwin suffered a heart attack and subsequent fatal stroke, Vi filled her days doing what she loved – making quilts, knitting, crocheting and crafting. All of her children, grandchildren and great grandchildren have treasures created by Vi. In 1987, finding love and companionship, Vi married Norman Haeseker, a retired farmer from Flagler, CO who had moved to Ft. Morgan. Together they did some traveling in his fifth wheel visiting family who by this time had spread from coast to coast. After 13 years together, Norm entered his heavenly home. Vi continued her hobbies and enjoyed her Trinity Lutheran Church friends and frequent visits from family. At age 101 Vi moved to independent living at San Marino Retirement Villa in Westminster, CO where she lived for 2 years sharing stories with best friend Vi June. When no longer able to be independent, Vi move to Minocqua, WI to live with her daughter, joining Peace Lutheran Church in Arbor Vitae. Vi loved music and loved to sing. She was often heard humming as she was working and is surely singing in heaven. Along with her spouses, Viola is preceded in death by brothers Irwin (Mae) Kuker and Rev. Lester (Esther) Kuker and daughter-in-law Marlene Pipho. She is survived by her six children Don Pipho of Paullina, Iowa; Richard (Netha) Pipho of Grimes, Iowa; Darroll (Janice) Pipho of Westminster, Colorado; Carol (Dan) Lewis of Owasso, Oklahoma; Eileen (Ron) Bruesewitz of Minocqua, Wisconsin, and Duane (Bobbie) Pipho of Casa Grande, Arizona; two stepsons Robert (Dottie) Haeseker of El Cajon, California; and Don (Vicci) Haeseker of DeKalb, Illinois; 20 grandchildren, and 31 great grandchildren. Memorial Services will be held in Ft. Morgan, CO at Trinity Lutheran Church on Friday, July 30 at 10:30 a.m. in celebration of her life. In lieu of flowers, memorials may be given to Lutheran Hour Ministries.

The family of Viola Pipho Haeseker created this Life Tributes page to make it easy to share your memories.