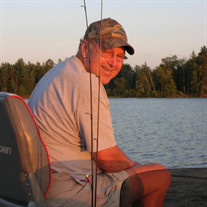 Thomas J. Lewinski February 27, 1946 – March 7, 2019 The world lost a great fisherman and a sweet man on March 7, 2019, when Thomas Joseph Lewinski of Minocqua passed after a courageous bout with cancer. He was 73 years old. Tom was born in Milwaukee, WI, on February 27, 1946, but spent his childhood growing up in Iola, where he went on to graduate from Iola-Scandinavia High School in 1964. After high school, Tom moved to Marshfield and began working for Badger Fixtures, Inc. as a cabinet maker. Many of the custom bars Tom built in those early days are still in existence in various taverns and supper clubs in northern Wisconsin today, a testimony to his craftsmanship. He spent his entire career as a cabinet maker and worked his final years for St. Joseph’s Hospital in Marshfield, a job he truly loved. It was in Marshfield where he met the love of his life, Joycie, and the two married on May 11, 1968. They raised two sons- Chris, born in 1970, and Todd, born in 1972. Tom loved spending time with his wife and boys, and the family enjoyed many camping weekends and summer road trips as Chris and Todd got older. Tom particularly enjoyed hunting and fishing with his son Chris. The two rarely missed a weekend during the bowhunting season and enjoyed countless hunts together. Some of Tom’s favorite memories were of the “deer shack”, an old horse barn foundation he and his brother Jim converted to a hunting camp in the late 1970’s. Located north of Iola, the Shack was “home” to a large party of hunters every deer season, and Tom loved every minute of this time with his family and friends. Later, he, Chris and Tom Peterson purchased a hunting camp and 100 acres in northern Wisconsin. This deer camp, formally known as “R’treet”, was Tom’s labor of love, and he and Tom Peterson spent nearly every weekend for two years completely renovating and adding on to the original cabin. It was at R’treet, in 2001— 5 months after he suffered a heart attack— that Tom enjoyed his most successful hunting season, bagging a six point buck with his bow, and then an eight point buck with his rifle, one week later. As much has he enjoyed deer hunting, it couldn’t compare to his one true passion: fishing. From humble beginnings catching panfish as a young boy in Lake Iola, Tom went on to fish innumerable lakes in northern Wisconsin, Minnesota, Michigan, Tennessee, Florida, and Ontario, Canada. He also made three trips to Alaska, and caught his largest halibut, a 135 pounder, in Cook Inlet. But his favorite trip was always the annual fly-in fishing camp in northern Ontario with his buddies Tom Peterson, Larry Krainz, John Skaden, and Dick Cook. For Tom, nothing could beat the heft of a walleye on the end of his line, the song of the hermit thrush, and a brandy old-fashioned (sweet!) while watching a Canadian sunset with his friends. When he wasn’t fishing, Tom enjoyed traveling with Joycie, and the two explored many of America’s National Parks, their favorites being Bryce and Zion. They also visited Hawaii, Mexico, Austria, Switzerland, Croatia, and their most memorable destination, the island of Saint Lucia. In later years, Tom also enjoyed their annual winter stay in Sedona, Arizona, where he liked to golf and visit with other friends escaping the long Wisconsin winters. The final dream come true for Tom was when he and Joycie purchased their home on Bullhead Lake in Minocqua in 2002. Retiring in 2011, he enjoyed eight years of solitude on their little lake, listening to the loons at night and enjoying an old-fashioned around the campfire with his friends and family. When Tom learned of his terminal diagnosis in December 2018, he reflected on a life well lived and expressed gratitude for all he had done, seen and experienced. He loved, and was loved by, many and will be missed by all those whose lives he touched with his smile, laughs, and hugs. Carrying on Tom’s memory and name are his wife Joycie of Minocqua, son Chris and daughter-in-law Rachael of Sheboygan, and grandson Hunter of Clinton, NY. A Memorial Service will be held at 1:00 PM on Saturday, March 23, 2019 at Faith Evangelical Free Church, 9035 Blumenstein Road, Woodruff, with a gathering one hour prior to the service at the church.

The family of Thomas J. Lewinski created this Life Tributes page to make it easy to share your memories.

Send flowers to the Lewinski family.