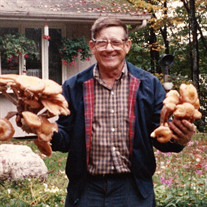 Thadeus (Ted) Blazkowski passed away on December 12, 2018, under the loving care of the Ministry Home Care Hospice Team at Seasons of Life, near his family in Woodruff. Ted was born in Laporte, Indiana, where his parents owned a farm, on the 18th day of December in 1923. He attended Catholic Schools in Chicago. He tried enlisting the U.S. Navy on December 8, 1941; however, the Navy made him wait another 10 days until his 18th birthday on December 18th. After Boot Camp, he and his friends were assigned to serve on the USS Indianapolis. Ted served on the Indianapolis during the Aleutian Islands Campaign until the end of 1943, when he was posted to the Navy’s Southern Attack Force on a fleet repair ship, the USS Ajax, until the end of WWII. Not one of his shipmates on the “Indy” survived. After the war, Ted lived with his parents working on their farm near Marshfield, WI, before moving to Woodruff in 1943, where his brother Eugene owned a business. In 1948, Ted married the love of his life Phyllis Egtvedt. They eventually purchased his brother’s tavern, hotel, and attached restaurant in Woodruff. After running the property for 10 years, Ted sold his business and started working for the U.S. Postal Service as a clerk. He eventually became the Postmaster in Woodruff before retiring in 1987. Ted also served as Woodruff’s Fire Chief for many years, and was a proud member of the Woodruff VFW Post 7898 and the American Legion Post 89. He enjoyed playing cards with his friends at the Lakeland Senior Center, and also enjoyed having lunch with his fellow seniors, until recently. Ted was unable to make the Veterans Honor flight to Washington D.C. due to health concerns; however he was honored by them in a private ceremony at his home. Besides his family, he loved fishing, carving fish, and painting fish as well. Thadeus is survived by son Peter and his wife Dianne of Woodruff, grandson Bryon and his wife Katherine, and their children Connor, Sam, and Max, as well as his grandson Joseph living in Kronenwetter with his fiancé Kam, and her son’s Cayden and Max, as well as numerous nieces and nephews. He is preceded in death by his parents, brothers, sisters, and his loving wife, Phyllis (Egtvedt) Blazkowski, who passed away on August 21, 1995. Thadeus will be buried in Forest Garden Memorial Cemetery in Woodruff in the spring. In lieu of flowers, memorials may be given to the Ministry Home Care Hospice Team in Woodruff.

Thadeus (Ted) Blazkowski passed away on December 12, 2018, under the loving care of the Ministry Home Care Hospice Team at Seasons of Life, near his family in Woodruff. Ted was born in Laporte, Indiana, where his parents owned a farm, on the... View Obituary & Service Information

The family of Thadeus "Ted" S. Blazkowski created this Life Tributes page to make it easy to share your memories.

Send flowers to the Blazkowski family.