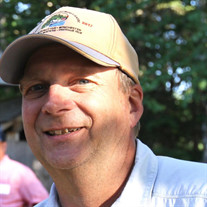 Stephen Smith, age 65, of Presque Isle, passed away on Saturday, April 11, 2020 at his home. Steve was born on December 16, 1954 in Beloit, the son of Richard H. and Nancy (nee Yost) Smith. He attended Purdue University where he received his Bachelor Degree in Mechanical Engineering and then went on to obtain his Masters in Mechanical Engineering from the University of Illinois. Steve married Deborah J. Baker on July 21, 1984. Steve worked for worked for both General Motors and General Electric. While working for G.M. he worked in Glendive, MT in Contract Maintenance alongside Burlington Northern Railroad. Steve had various hobbies; he was a member of The Lions Club and an accomplished woodworker. He had a great love for his HO scale model railroad that he built himself in two different homes, along with helping his father and brother build their own model railroads. Steve’s greatest love was fishing and participating in the Muskie Classic every September. He was very involved with the Economic Development Committee in Presque Isle and helped in stocking the pond at Pipke Park. To say that Steve enjoyed the Northwoods was an understatement. Having grown up on Crab Lake, he ended up living on Presque Isle Lake. Steve was a genuine, lucky and overall great man. He will be missed by so many including his wonderful 2 year old Chocolate Labrador puppies, Bella and Dozer. He is preceded in death by his grandparents; parents; numerous uncles and one brother. Steve is survived by his wife of 35 years; favorite aunt, Dorothy Taylor of Pekin, IL; sister- in –law, Mary Ann Smith; nephew, Michael (Joanna) and their 3 children and twin nieces, Katie (Doug) Gamroth and Emily(Kenny) Witt and their 3 boys; numerous nephews, nieces and cousins from TX, WI, CO and NE and the many great friends Steve has made throughout his life. Steve will also be missed by his very special friend, Maye MacLean. He sailed, snowmobiled and built snow dogs on Presque Isle Lake this past winter with her. They always shared fun and laughter along with a playing a good board or card game. Sometimes Maye won. A celebration of life will occur at a later time. In lieu of flowers, memorials may be given to: Crab Lake Conservation Foundation P.O. Box 256 Presque Isle WI 54557 Oneida County Humane Society 1852 N. Stevens St. Rhinelander, WI 54501 Northwoods Muskies Inc. P.O. Box 1090 PMB 204 Minocqua WI 54548

Stephen Smith, age 65, of Presque Isle, passed away on Saturday, April 11, 2020 at his home. Steve was born on December 16, 1954 in Beloit, the son of Richard H. and Nancy (nee Yost) Smith. He attended Purdue University where he received his... View Obituary & Service Information

The family of Stephen Smith created this Life Tributes page to make it easy to share your memories.

Stephen Smith, age 65, of Presque Isle, passed away on Saturday,...