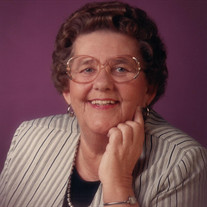 Ruth Falkner Ahlborn was called to her heavenly home on May 24, 2019. She went through school in Milwaukee, WI. When WWII started, she went to work in the defense plants; working at Oilgear Company and International Harvester Company in Milwaukee. Ruth came to Minocqua and stayed with relatives, where she met Alvin Ahlborn. Alvin was still in the service and was home on medical leave; when he went back to the hospital in Michigan they kept in contact through the mail and phone. When he was discharged, they planned their wedding and were married in September 1947. After marrying, Alvin and Ruth moved to Sayner and built a home. They also traveled to California and worked at a broccoli plant. Alvin and Ruth owned and operated Woodruff Motors, as a Dodge Chrysler and Plymouth dealership, in Woodruff until they retired. Upon retirement, they spent 35 years in Florida and the summers on Silver Lake in Hazelhurst. In 2005, they decided it was time to return to Hazelhurst permanently due to ill health. Alvin and Ruth were married 60 years when Alvin was called home to his Heavenly Father. Ruth would have been 95 years of age on September 1. Ruth is preceded in death by her parents, Norma and George Falkner; husband, Alvin; sister, Carroll Ahlborn and her beloved son, Russell. She is survived by her daughter, Marlene (Burnie) Lueth. Ruth was gifted with 4 grandchildren, Paul (Sarah) Lueth, Mindy (Jesse) Anderson, Brian (Kristina) Lueth and Daniel (Diana) Ahlborn and 7 great grandchildren, Cameron and Sofia Lueth, Taylor and Maya Anderson, Danelle, Noah and Elijah Ahlborn. She is also survived by many nieces and nephews. Special friends made Ruth’s life at the end, fill her with their love – Sassy and Renate, Jesse, JoAnn, Carne, Cleo and Tess, to name a few. Hospice was wonderful also. Visitation will be held from 2:00 – 4:00 PM on Saturday, June 8, 2019 at Trinity Lutheran Church in Minocqua, with a Funeral Service at 4:00 PM at the church. Interment will be at Lakeside Garden of Sleep in Hazelhurst, followed by dinner at the Hiawatha Club House.

Ruth Falkner Ahlborn was called to her heavenly home on May 24, 2019. She went through school in Milwaukee, WI. When WWII started, she went to work in the defense plants; working at Oilgear Company and International Harvester Company in Milwaukee.... View Obituary & Service Information

The family of Ruth M. Ahlborn created this Life Tributes page to make it easy to share your memories.

Ruth Falkner Ahlborn was called to her heavenly home on May 24,...

Send flowers to the Ahlborn family.