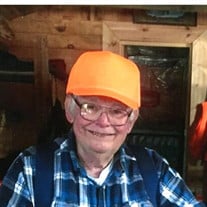 Russell Lyle Wagner passed away March 15, 2022, peacefully in his sleep in a nursing home in Hurley, WI. Most people knew him as Lyle Wagner, he was 84 years old. Lyle was born at his parent’s, Russell James Wagner and Ione Margaret (Lewis) Wagner home in Fifield, WI on January 10, 1938. He attended Minocqua Grade and High School, Minocqua, WI. Lyle was very athletic and played on a winning team of football in high school. After high school he worked for his father Russell Wagner logging with teams of horses (Banner, Silver and Baldy). He loved the outdoors. Lyle later served in the United States Army in Texas and Germany. When he returned back home, he again worked for his father in his excavation business and later moved to Franklin, WI and worked down there in excavation work. He married Phyllis Jean (Krogh) Wagner and together they bought a bar in the Franklin area. The Northwood’s was always both of their loves, so they sold their business and moved back to Lac du Flambeau, WI and took over his wife’s Family Bar Squaw Dam. Lyle worked for the Town of Lac du Flambeau, WI on the road crew during these years before retiring. He and Jean loved to travel so they made many trips across the United States. Lyle’s parents and family owned 320 acres of beautiful land for 66 years and he very much enjoyed spending his years on this land hunting, sharing it with his family and friends, maintaining it and relaxing in the beauty of it. He spent time and helped his brother Neil a lot who lived in the Wagner home. He very much loved his home on Squaw Creek and all the animals who visited him there. Lyle shared his last 18 years with his partner and good friend Marge Tutt, they both loved to travel and enjoyed each other’s company. Marge took care of him during his many health issues over the last several years. Lyle will be missed by many. Lyle is survived by Marge Tutt, his partner; Judith Ione (Wagner) De Bruyne, sister; Ronald A. De Bruyne, brother-in-law; Ronald A. De Bruyne Jr., nephew; Kristen M. De Bruyne, niece; Lydia (Martin) Wagner, sister-in-law; Mary Jo (Wagner) Bruyette, niece; James R. Wagner, nephew; Amy Wagner, niece; Todd Wagner, nephew; Brian Wagner, nephew; and many grand nieces and nephews. Also survived by Rick (Mary) Juern, stepson and David Yuswak, stepson. Lyle was preceded in death by Phyllis Jean Wagner, his wife; parents Russell James Wagner and Ione Margaret Wagner, Richard Lee Wagner, Robert Wayne Wagner, Beverly Jean (Miller) Wagner, Dennis Neil Wagner, James O. Wagner. Lyle was the last of 5 brothers.

Russell Lyle Wagner passed away March 15, 2022, peacefully in his sleep in a nursing home in Hurley, WI. Most people knew him as Lyle Wagner, he was 84 years old. Lyle was born at his parent&#8217;s, Russell James Wagner and Ione Margaret... View Obituary & Service Information

The family of Russell Lyle Wagner created this Life Tributes page to make it easy to share your memories.

Send flowers to the Wagner family.