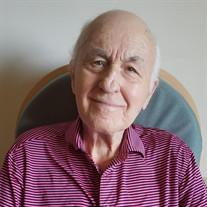 Roland Emile Durette, son of Emile and Marie Anne (Martin) Durette, died December 4 at the age of 89. He is survived by his four children, Marc Durette of Minocqua, WI; Luc Durette of Friday Harbor, WA; Katie Tubbesing of Overland Park, KS; and Anne Durette of Middleton, WI. His beloved wife Catherine duVair Durette died in 2008. Born in Manchester, NH on May 2, 1932, Roland is also survived by his seven brothers and sisters, Fr. Roberto Durette, OMI in Siglo XX, Bolivia; Pauline Rousseau in Melbourne Beach, FL; Bernadette Warren in Venice, FL; Paul Durette in Naples, FL; Andrew Durette in Venice, FL; Philippe Durette in Chagrin Falls, OH; and Rita Therrien in Manchester, NH. After his elementary and secondary education in NH and Maine and service in the US Army stationed in Iceland, Roland received a BA degree in French studies from St. Anselm's College in Manchester, NH, an MA degree in French from Laval U. in Quebec City, CA, and a Ph.D. degree in education from Florida State University in Tallahassee, FL. A devoted, generous, and loving father, son, brother, and grandfather, Roland was above all a family man. His other passions were piano playing, competitive tennis, and the French language. A Francophile and proud French Canadian, Roland was a dynamic professor of French at UW-Whitewater. He also taught language institutes first at Star Lake, WI, and then throughout France with Catherine, providing graduate credit to French teachers nationwide. Many teachers repeated the course just to be with this exuberant team again. Roland, “Papi” to his seven grandchildren, was a doting grandfather. Involved in their lives, he taught his grandchildren his values and was pleased to see them carry on his greatest loves in life including service, foreign languages, tennis, and music. His parents and seven siblings were also very dear to him. Roland’s life cannot be summarized without mentioning his love of laughter and his engaging personality. He impacted and uplifted the lives of so many and is terribly missed. Donations may be made to the Robert Durette Mission Fund at St. Mary's Bank, P.O. Box 990, Manchester, NH. A check should be made out to St Mary's Bank and include a note to deposit it to the Robert Durette Mission Fund (Account No. 800206542).

The family of Roland E. Durette created this Life Tributes page to make it easy to share your memories.

Send flowers to the Durette family.