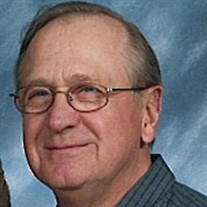 Roger Joseph Hochhalter of Winchester, WI formerly of Milwaukee, WI passed away on June 25,2020 at the age of 79 after several years of dealing with LewyBody Dimentia and Parkinson’s. He was born December 27, 1940 to parents Floyd and Anna(Lentz) Hochhalter. Right from Pulaski High School Roger entered the Marines in 1958 where he was in the infantry stationed in Okinawa for two years and finished his third year in Subic Bay in the Phillipines as E4 Corporal Of the Guard. Roger was proud to be a Marine and had the utmost respect for all who served in the Armed Forces (especially those who served during a time of conflict). Shortly after returning from the service he met Carole Koenigsreiter and on May 25, 1963 they married at St. Alphonsus Catholic Church in Greendale, WI and she became the “love of his life”. Together they raised two great sons, Steven and David. Roger enjoyed taking them fishing, hunting and camping at Car-Lee Campsite on South Turtle Lake through the years with a second-hand home made tent camper. Roger’s passion was fishing and after spending his honeymoon on South Turtle Lake in Winchester, he knew this was where he wanted to retire; and in 2001 that became a reality. They built their home on South Turtle in 1994, went up as often as they could until he retired. He fished every day, sometimes with friends, sometimes with Carole and sometimes by himself where he could sit, enjoy nature and (years ago) smoke a cigar. After working for 23 years at McQuay/Perfex in Milwaukee as a silver brazer, the company moved to Mississippi and Roger started over working at PPG Industries in Oak Creek, WI as a paint filler for 16 years until he retired in 2001. Roger’s other interests during the years were coin collecting, active lifetime member of Walleye’s Unlimited Organization of southern Wisconsin and Northern Illinois, the stock market, country Western music, playing cards and feeding and watching the birds and deer…. and grumbling at the squirrels. He and his wife belonged to Our Lady Queen of Peace Catholic Church of Manitowish Waters. His faith was important to him and he knew when his time was up, he would be in good hands. Roger was preceded in death by his parents Floyd and Anna Hochhalter and brother-in-law Arlen Koenigsreiter. Roger is survived by his wife Carole, sons Steven (Barbara) of Milwaukee and David (Rochelle) of Mount Pleasant, Wi., three sisters Joyce Hochhalter, Carol(Larry) Cahak, and Susan Haase. Further survived by sister-in-law Sandra Koenigsreiter, dear friend Jodean Labreck, nieces, nephews, other relatives and many friends. The family would like to thank Dr. Gabert, the staff at Country Terrace and Hospice for their care, patience and support. Also a thank you to Pastime Club for the time Roger was able to spend with them. Visitation Wednesday, July 1st 11:00 a.m.; with a Service at 12:00 p.m. in the chapel at Bolger Funeral Home-WOODRUFF chapel. A private family burial will be in the Winchester Cemetery.

Roger Joseph Hochhalter of Winchester, WI formerly of Milwaukee, WI passed away on June 25,2020 at the age of 79 after several years of dealing with LewyBody Dimentia and Parkinson&#8217;s. He was born December 27, 1940 to parents Floyd and... View Obituary & Service Information

The family of Roger J. Hochhalter created this Life Tributes page to make it easy to share your memories.

Send flowers to the Hochhalter family.