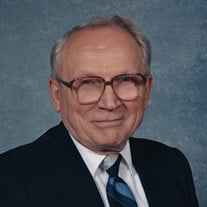 Dr Robert L. Smith, age 95, a resident of Minocqua since 1964, died in his home on May 14, 2019. He was born in Appleton, WI on September 1, 1923 to Leslie C. and Helen A. (Ballard) Smith. Following graduation from Kaukauna High School, Robert attended the University of Wisconsin-Madison before serving for 3 years in the US Army in WWII. After service he attended Marquette University Medical School (now the Medical College of Wisconsin) from which he graduated in 1951. After an internship in Janesville, WI and a Radiology residency at Milwaukee County General Hospital (now Froedert), he was on the staff of the Marshfield Clinic, Marshfield, WI for 3 years then relocated to Sheridan, WY for 5 years. Robert returned to WI in 1964 to become the radiologist at the old Lakeland Memorial Hospital (now Howard Young Medical Center) as well as hospitals in Park Falls, WI and Ironwood and Wakefield, MI. He retired from this circuit in 1984. Robert was a member of the American College of Radiology, the Radiological Society of North America, and the HYMC medical staff. In 1948 he married Carolyn L. Henricksson of Marshfield, his wife of 71 years, who survives him along with three children, Ellen L. Johnson of North Branch, MN; Dr. David R. (Roberta) Smith of Detroit Lakes, MN; Rev. Linda A. (Rev. Michael) Rozumalski of Luck, WI; and five grandchildren, Peter (Andre'a), Maren, and Jan Rozumalski; Greg (Gabby) Smith and Charlie (Natasha) Knorr-Smith; several nieces and a nephew. He is preceded in death by his sister, Carol M. (Smith) Forster, of Appleton, WI. Robert's life long interests have included antique cars - he has owned a number of them appreciated for their classic lines, workmanship, the sound of their engines, and the joy of driving. Another favorite hobby was wood working - evidence of which can be found in many homes of friends and family. From jewelry boxes to dressers and desks, from candlesticks to canisters and cradles, children's toys and turned bowls, Robert leaves behind a legacy in beautiful wood. Perhaps his greatest interest was music. Over the years this encompassed church choirs, classical music as well as popular songs from his youth, Barbershop choruses and quartets - arranging performance pieces for both. His expertise at playing the clarinet began in grade school and ended only when his breath could no longer support the tone, two months ago at age 95. Along the way, he tutored 4 high school clarinetists, entertained and challenged the memories of elderly residents in assisted living and day care programs, performed with the community band, and composed hundreds of pieces for clarinet. Since 1967, a yearly highlight was moving to their lake cottage where he knew every tree of the 30 acres and found peace, beauty and serenity. Robert will be missed by many in the community and dearly loved by the family he leaves behind. A memorial service celebrating Robert's life will be held June 1, 2019 at 2:00pm at the Methodist Church of the Pines, Minocqua, WI, Pastor Mark Gilbert officiating. Reception to follow. In lieu of flowers, memorials may be given in Robert's name to the United Methodist Church of the Pines Endowment Fund, P.O. Box 144, Minocqua, WI 54548 or the Oneida County Humane Society, 1852 N. Stevens Street, Rhinelander, WI 54501.

The family of Dr. Robert L. Smith, MD created this Life Tributes page to make it easy to share your memories.