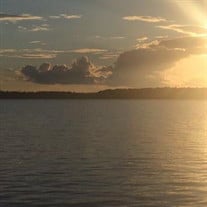 Robert (Bob) John Harry Pace, 66, passed away on November 1st, 2018 after a courageous battle with amyotrophic lateral sclerosis (ALS). Bob was born on April 17th, 1952 in Chicago, IL to Jean M. and Robert M. Pace. Bob graduated from Saint Mary’s University of Minnesota. He was married to Heike Taube for 20 years, during which time they had two children, Jonathan and Joanna. Bob was an accountant for 42 years and came to know Minocqua as his lifelong home. Bob’s passions lived on the lakes and in the woods; he was a true outdoorsman. In fact, he was so in-tune with nature that he was considered the “go-to” man for predicting the weather. He often knew, even to the hour, what the day would hold. Bob loved water skiing, cross country skiing, downhill and telemark skiing, kayaking, paddle-boarding, kite-surfing, mountain-biking, and playing tennis; if he could strap it on, he would do it. He was a long-time member of the Min-Aqua Bats Water Ski Club, and he competed at the state level in water skiing for years and was division champion several times. He dreamed big by jumping off cliffs and flying ultra-light hang-gliders, and he found refuge at “The Hunting Shack” and by practicing yoga. When his now-adult children were young, Bob designed and built ski-jumps at Minocqua Winter Park and in his own backyard, coached soccer teams, pieced together model airplanes, designed the perfect trainset lay-outs, and built a swing set by hand. Bob is preceded in death by his parents. He is survived by his long-time partner and caregiver, Nancy Ramsay; one son, Jonathan (Elizabeth); one daughter, Joanna (Andrew); five siblings, Valerie (Al), Christine (Conrad), Laurel (Jerry), Rex (Mirta), and Jeanie (Glen); and many nieces and nephews. Donations can be directed to the ALS Association. A visitation will be held at Bolger Funeral Services in Woodruff at 11:00 on Saturday, November 10th. A memorial service will follow at 12:00.

The family of Robert "Bob" Pace created this Life Tributes page to make it easy to share your memories.

Send flowers to the Pace family.