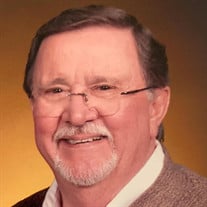 Richard G. Smith, age 85, of Mercer Wisconsin, passed away February 23, 2021, at Tudor Oaks Frances Henry Health Center in Muskego, Wisconsin after suffering a stroke. Richard was born April 6, 1935, to George and Ethel (Gullickson) Smith in Milwaukee, Wisconsin. He graduated from Milwaukee North Division High School in 1953. On July 6, 1957, he married the love of his life Dorothy Sheahan at the Immaculate Heart of Mary Catholic Church in West Allis, Wisconsin. At the time of their marriage, Richard was employed by Wisconsin Bell. He attended classes at Milwaukee School of Engineering, which allowed him to pursue a career as an electronics technician with AC Delco Electronics in Oak Creek, Wisconsin. He was very proud of his work involving navigation systems for the NASA space program and felt honored when meeting the astronauts that toured the plant. He enjoyed outdoor activities including camping, fishing, and family time in the north woods. Richard was an avid football fan and enjoyed following the Green Bay Packers and Wisconsin Badgers. Richard achieved his dream of retiring to the north woods in 1990, after a thirty year career with Delco Electronics. In his retirement his hobbies included woodworking, gardening, enjoying nature, and the change of seasons. He especially enjoyed watching the loons on Spider Lake. Richard is survived by his loving wife Dorothy, his children; Richard (Donna) Smith, Timothy (Judy) Smith, Kendall (Karen) Smith, and Wendy (William) Dorley. He is survived by seven grandchildren: Joseph Smith, Paul (fiancée Nicole) Smith, Jennifer (Marc) Luecke; Courtney Smith, Kelsey Smith; Jacob Smith; and Hannah Dorley. He is also survived by two great grandchildren Eden and Douglas Luecke. Richard’s life will be honored with a Mass of Christian Burial on Wednesday, June 9, 2021, at St. Isaac Jogues Catholic Church in Mercer, Wisconsin at 11:00 a.m. Visitation will be held at the church from 10:00 a.m. until the time of Mass. Burial will follow at the Mercer Town Cemetery. In lieu of flowers, donations may be made to a charity of your choice. The family wishes to express their sincere thanks and appreciation to the staff of the Mercer Area Ambulance Service, UW Madison Hospital, Neuroscience/Stroke ward, and Tudor Oaks for the excellent care Richard received.

The family of Richard G. Smith created this Life Tributes page to make it easy to share your memories.