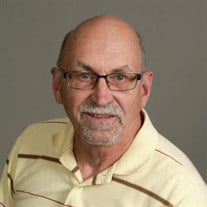 Richard John Johnson, much loved dad, grampa, and friend, died in a tragic accident on April 23 in Minocqua, WI. He was born October 24, 1949, to John “Ragner” Johnson and Eileen (Meagher) Johnson in Iron River, Michigan. He graduated from Iron River High School in 1968 and often joked that he was kicked out of the marching band for intentionally making his tuba “Pah” when he was supposed to “Oomp.” His kids suspected there may have been other contributing factors leading to the end of his high school musical career… After attending technical college, he moved to Wisconsin to work with General Telephone and Electric. He was a volunteer fire fighter for the town of Hazelhurst for over 20 years, and his 1976 Fire Fighter of the Year award still hangs proudly in his home. It was during his early years as a volunteer firefighter that he earned his nickname “Pickhandle,” because he could hold the trunk of a tree in both hands with his body horizontal to the ground like the handle of a pickax. His core strength also made him freakishly good at yoga; his daughter was furious when he popped himself into a perfect crow pose first try when it had taken her 5 months to master that pose! Though much of his adult life was spent in Northern Wisconsin, he was proud of his UP Michigan heritage and was quick to turn on his Yooper charm, sprinkling his stories with “doncha knows," “Oh yah heys,” and "uff-das" anytime Michigan was mentioned in his presence. He loved being outdoors, either “neakin’ through the woods” exploring or doing some project that involved fixing or building something. He was quick to offer help to friends and family, whether they were only in need of an extra set of hands or required the more intensive help of putting a life back together. It seemed there was nothing he couldn’t fix. He was also an active member of Ascension Lutheran Church, serving on, of course, the Building and Grounds Committee. He loved Johnny Cash and the Beach Boys, and his kids remember this was all that played on the 8 track in his pick-me-up truck when they were young. He was often the hit of the party and could dance circles around his kids. He is survived by his partner, Margaret Strong, and his three children: Karla Feindt, MD (Darrell Davis) of Salt Lake City, UT, Deanna Johnson (Tom Nowak) of Shawano, WI, and Jason Johnson (Nikki) of San Antonio, TX, and one grandson, Giovanni Johnson of San Antonio, TX. He is also survived by his “unofficial” kids and grandkids: Heather Kuechenmeister, Matthew Dodd, David (Rachel), Myria and Evelyn Strong, Chris (Heather), Preston, Cory, and Gavin Strong, and Andy, Jamie (Kayla), Brandi, and Waverly Strong. What his kids will miss most is his squealing laughter which involved much knee slapping and tears, along with comments that he was laughing with us, though we knew darn well it was at us…usually rightfully so. After learning of his death, a friend stated it best: “Of course Dick died helping someone. He would not have wanted it any other way.” His love, guidance, and laughter will be greatly missed by his friends and family. There is now a hole in the universe the size of our dad. A memorial service will be scheduled so all friends and family can celebrate his life, once social distancing has ended.

The family of Richard J. Johnson created this Life Tributes page to make it easy to share your memories.

Send flowers to the Johnson family.