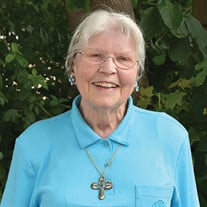 Obituary – Rev. Dr. Chomingwen Pond Rev. Dr. Chomingwen Pond, age 91, of Minocqua, passed away on August 4, 2019. Rev. Pond was born in Madison, Wisconsin on September 1, 1927. As a young child, she traveled often with her parents, accompanying them on archaeological expeditions to Algeria. This travel instilled in her a curiosity about the world and led her to travel to distant lands in her adult years. She earned her bachelor’s degree in geology from Beloit College, Beloit, Wisconsin in 1950. She went on to Germany, where she took a post with the U.S. Army directing recreational programs for soldiers. It was then that she decided that she wanted to learn more about the Christian faith. She pursued a Bachelor of Divinity degree from Garrett Biblical Institute in 1961. While attending seminary, she spent a summer in Montgomery, Alabama, and became heavily involved in the Civil Rights Movement. She earned her Ph.D. in religion from Claremont Graduate School in 1987. Rev. Pond entered into ministry in 1962. She was the first woman to become ordained in full connection with elder’s orders in Wisconsin in 1964. She served inner-city and small-membership churches for approximately 15 years and taught at Payne Theological Seminary in Ohio. She later became a missionary with the General Board of Global Ministries and served in Sierra Leone and in Zimbabwe at African University. During her years of missionary service at Africa University, she taught ethics in the Faculty of Theology. She retired from ministry in 1998. She was committed to peace with justice ministries and held strong connections to the global church, especially in Africa and to Africa University. She continued to remain active in the Wisconsin Conference. She also served on the conference board of global ministries and was the Heartland District secretary of global ministries for nine years. Rev. Pond edited her mother’s published memoirs of three archeological expeditions to northern Algeria entitled If Women Have Courage…: Among Shepherds, Sheiks, and Scientists in Algeria by Dorothy L. Pond. Rev. Pond was active in the United Methodist Church of the Pines in Minocqua, where she co-chaired the Missions Committee, served as a member of the Ministry Council, was a member of United Methodist Women, and continued to be a proud and prominent member of the Wisconsin Annual Conference. To many people, Rev. Pond was known as Chomee. She is remembered for all of her lifelong accomplishments, and also for being a gifted writer, a storyteller, a lifelong learner and a teacher. She was known for being an intelligent, funny, and compassionate friend. Her life is celebrated and those who knew and loved her will mourn the passing our “our beloved sister in faith from this life eternal in Christ.” Surviving Rev. Pond are her nephew, David (Anna) Pond of Rice Lake, Wisconsin, and niece, Kristen Pond, of De Pere, Wisconsin. Rev. Pond was preceded in death by her parents Alonzo & Dorothy Pond and a brother, Arthur Pond. A Memorial Service will be held on Friday, August 16, 2019 at United Methodist Church of the Pines, 415 Chippewa Street, Minocqua. Visitation will begin at 10:00 a.m. and the service will commence at 11:00 a.m. In lieu of flowers, memorial gifts may be directed to Church of the Pines, P.O. Box 144, Minocqua, WI 54548, to Africa University, to the Alonzo and Dorothy Pond Memorial Fund at Beloit College, to your local church missions account or to any organization or ministry that you know was important to Rev. Pond. Condolences may be sent to Church of the Pines, P.O. Box 144, Minocqua, WI 54548.

The family of Rev. Dr. Chomingwen Pond created this Life Tributes page to make it easy to share your memories.

Send flowers to the Pond family.