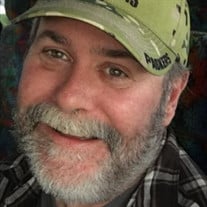 Randall Arthur Thorson, 57, Madison, WI, passed away on March 11, 2019 at his favorite place on Little John Lake in Boulder Junction. He was born in Madison on August 18, 1961 to Rodney Thorson and Margaret Pintar. Randy was raised in Elkhorn and attended the University of Wisconsin where he met his wife, Theresa Bachorz. They remained in Madison and raised their two children, Sam and Sadie. Randy was an avid reader. As an English literature major he was never at a loss for an appropriate quote from a book, movie, or song. One of Randy’s many favorite songs to quote was Warren Zevon’s “I’ll Sleep When I’m Dead.” Concerts, trap shooting, hunting, cooking, and RC airplanes were his favorite pastimes. Most important to him was time spent with family and friends. Good times up north included singing around the campfire, watching meteor showers, and drinking whiskey until sunrise. Music, conversation, and laughter were ever-present. Randy was a generous and wise person. He had a kind heart, quick wit, and was able to give insightful advice. In addition to Theresa, Sam, and Sadie, Randy is survived by his mother, Margaret Pintar; siblings Derek Thorson (Cheryl Gracey) and Cydney Welter; in-laws Tim Bachorz, Mary Bachorz, and Mark Bachorz (Tina); and many other family members and friends. He was preceded in death by his father, Rod Thorson; stepfather, Tom Pintar; brother-in-law, Scott Welter; sister-in-law, Cindy Thorson; mother-in-law, Marlyn Bachorz; and father-in-law, Tom Bachorz. A Memorial Service will be held Saturday, May 18, 2019 at Deerfield Rod and Gun Club, Deerfield, WI at 11:00 a.m. followed by a luncheon and trap shoot at 2:00 p.m. Non-members: $5.00 for 25 sporting clays, must supply own shotgun and shells. Bolger Cremation and Funeral Services is serving the family. www.bolgerfuneral.com

Randall Arthur Thorson, 57, Madison, WI, passed away on March 11, 2019 at his favorite place on Little John Lake in Boulder Junction. He was born in Madison on August 18, 1961 to Rodney Thorson and Margaret Pintar. Randy was raised in Elkhorn... View Obituary & Service Information

The family of Randall A. Thorson created this Life Tributes page to make it easy to share your memories.

Send flowers to the Thorson family.