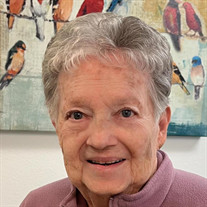 Phyllis Irene Nelson Phyllis Nelson, 90, passed away peacefully at Milestone Senior Living Center in Woodruff, Wisconsin on April 16, 2022 surrounded by the love of her family and many special caregivers. Phyllis was born August 29, 1931 to Fred and Irene (Kuebler) Clark in Waterman, Illinois. She grew up in Rockford, Illinois and spent childhood summers at her grandparents farm in Brownsville, Minnesota. Phyllis was a 1950 graduate of Rockford West High School, and was crowned Miss Rockford and then Miss Illinois State Fair shortly thereafter. She went on to attend the Ray Vogue School of Design in Chicago, Illinois before marrying Lyle Nelson in 1954. Lyle and Phyllis raised their three children in Rockford where they were charter members of Shepherd of the Valley Lutheran Church. The family spent their summers on Boulder Lake in Boulder Junction, Wisconsin. Phyllis had many happy years on the lake and enjoyed traveling, china painting, and spending time with good friends—both in Rockford and up north. But her favorite thing to do was dance with Lyle! Phyllis is survived by her three children-- D’Arcy (Phil) Theiler, Marla (Ken) Henry, and Clark (Lanette) Nelson; seven grandchildren —Courtney (Nick Durkee) Jolin and Stephanie (Billy Ross) Jolin; Logan (Valerie), Trent, and Blake Henry; and Amanda and Connor Nelson); three great-grandchildren — North and Fischer Durkee, and Fletcher Ross. She is also survived by a brother, Terry Clark, as well as a nephew Wade (Kim) Clark and niece Cynthia Nelson. She was preceded in death by her parents, and her loving husband of 63 years, Lyle. A memorial service is planned for Saturday May 14, 2022 at noon at Shepherd of the Valley Lutheran Church, 2715 South Mulford Road, Rockford, Illinois 61109. Memorials can be made to the church or to the Boulder Junction Community Park (P.O. Box 616, Boulder Junction, Wisconsin 54512).

Phyllis Irene Nelson Phyllis Nelson, 90, passed away peacefully at Milestone Senior Living Center in Woodruff, Wisconsin on April 16, 2022 surrounded by the love of her family and many special caregivers. Phyllis was born August 29, 1931 to... View Obituary & Service Information

The family of Phyllis I. Nelson created this Life Tributes page to make it easy to share your memories.