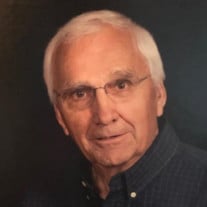 Paul J. Gottwald Paul Joseph Gottwald, age 88, passed away on June 1, 2020. Paul was born on April 5, 1932, to John and Mary (Moha) Gottwald in Wakefield, MI. He attended school in Wakefield, MI, and continued his education at Michigan College of Mining and Technology earning a degree in Forestry Management. On June 25, 1955, he married Eileen Anne Bertie in Wakefield, MI. They moved to Fort Leonard Wood, MO, while Paul served his country as a commissioned officer in the U.S. Army. Paul’s 35-year career with the Wisconsin Department of Natural Resources moved his family from Tomahawk to Medford to Park Falls to Marinette and finally back to Park Falls where he concluded his career as the DNR Area Director, retiring in 1989. He and Eileen realized one of their life’s dreams when they built their forever home on the shores of the Turtle-Flambeau Flowage, where they enjoyed their retirement years with family and friends. He was very devoted to his Lord and his family, passing along his love for God’s great outdoors, camping, fishing and traveling. He was active in his church and his community (Boy Scout leadership, Town of Sherman volunteer firefighter, Iron County Board of Supervisors Chairman). Paul is survived by Eileen, his wife of 65 years, and their five children: Paul (Jane) of Eau Claire; Mark (Jane) of Duluth, MN; Michael (Jean) of Park Falls; Joanne (Bill) Flood of Marathon; and Jennifer (David Sherlock) of Mt. Horeb. He is also survived by 11 grandchildren, 19 great-grandchildren and numerous nieces and nephews. He was preceded in death by his parents, his brother John Gottwald, his sister Mary Mahnke and his infant son, Karl. A memorial mass will be held Saturday, June 13th at 11:00 a.m. at St. Anthony of Padua Catholic Church in Park Falls. In lieu of flowers, the family asks that any memorials be made to St. Anthony’s Catholic Church in Park Falls. Bolger Cremation and Funeral Services in Minocqua is assisting with arrangements. The family would like to thank the staff of Park Manor River’s Edge in Park Falls for the loving care and support they provided during Paul’s last days.

The family of Paul J. Gottwald created this Life Tributes page to make it easy to share your memories.

Send flowers to the Gottwald family.