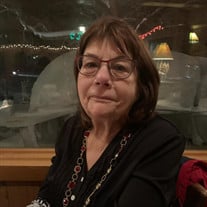 Patricia A. Bencz, 75, of Lac du Flambeau, formerly of Sheboygan, passed away at her residence on Thursday January 21, 2021, after a lengthy battle with dementia. She was born in Sheboygan on April 11, 1945 to Edward and Elda (nee Roehl) Staabs. She attended Trinity Lutheran School and graduated from Sheboygan North High School in 1963. After graduation, she started working at Sheboygan Glass Company, where she remained until her retirement in 2009, and created so many great memories with the people there. She also held various part-time jobs including Kohler Company, Riverdale, and the Main Sail. She married Kenneth J. Bencz on April 21, 2002 in Las Vegas, NV. They spent most of their time in Sheboygan until they permanently moved to Lac du Flambeau in 2016, where they had a house on White Sand Lake. Patricia enjoyed boating, gardening, traveling, sewing, and especially hosting and spending time with her friends, family, her grandchildren, and her dog Bo. She was known for making homemade hard candy at Christmas and sharing it with others. She also cherished the time she spent while watching her grandchildren during her retirement. Her interest and concern for the loon population on their lake led her to become a Loon Ranger with the LoonWatch program out of Northland College in Ashland, WI for many years. She was a huge fan of Elvis, and was grateful for the opportunity to see him live in Milwaukee in 1977. She was preceded in death by her parents, her step father Sylvester Neuber, and a step brother Richard Neuber. Survivors include her loving husband Ken, three children, Nicole (Joel) Schumacher, Casey (Tram) Littmann and Kevin (Karie) Bencz; five grandchildren, Tanner and Whitley Schumacher, Geneva and Presley Bencz, and Zoey Littmann; a brother Rick (Dianne) Staabs, two step sisters, Ann (Adrian) Wondergem, Mary (Tom) Goric, a step brother Tom (Marie) Neuber and her step sister-in-law Donna Neuber. A private family celebration of her life will be held this summer. A memorial fund has been established in her name. The family would like to extend a huge thank you to Dana Irmick, N.P., and the nurses and aides with Ascension in home hospice care. Bolger Cremation and Funeral Services of Woodruff and Minocqua is assisting the family with arrangements. Please visit www.bolgerfuneral.com to share condolences, memories or pictures.

Patricia A. Bencz, 75, of Lac du Flambeau, formerly of Sheboygan, passed away at her residence on Thursday January 21, 2021, after a lengthy battle with dementia. She was born in Sheboygan on April 11, 1945 to Edward and Elda (nee Roehl) Staabs.... View Obituary & Service Information

The family of Patricia A. Bencz created this Life Tributes page to make it easy to share your memories.

Patricia A. Bencz, 75, of Lac du Flambeau, formerly of Sheboygan,...

Send flowers to the Bencz family.