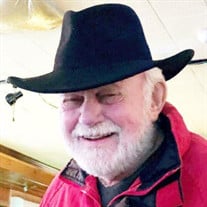 Orville Edward “Bud” Arnold died peacefully at the age of 87 surrounded by his family on February 2, 2021 in Minocqua, Wisconsin. Bud was born on September 30, 1933 in Sparta, Wisconsin. At age one his family moved to Madison where Bud would grow up with his sister Mary and create the first few phases of his life as a dedicated Madisonian with great loyalty to his adopted hometown. At an early age Bud knew that his formal name, Orville would be short-lived. This is revealed in his kindergarten graduation certificate which proclaimed “Buddy” would be moving on to 1st through 8th grade at Blessed Sacrament School. From there he transitioned to Edgewood High School a few blocks away from the family home on Norwood Place in the famous “triangle” neighborhood. Edgewood High School was a big focus of Bud’s life as he met lifelong friends there and returned years later to send his own four children through Edgewood and was instrumental in forming the now highly successful hockey program there in 1974. Bud attended the University of Wisconsin Madison, graduating in 1955 with a BS in Civil Engineering. Engineering became a big part of Bud’s life moving forward, initially employed by Flad & Associates and then forming Arnold & O’Sheridan Consulting Engineers where, as President he was responsible for structural safety of buildings and bridges throughout the state. Key projects included structural analysis of the Camp Randall upper deck, Pettit Ice Arena, The Wisconsin Center and multiple University of Wisconsin buildings as well as the Monona Terrace Convention Center. Bud’s influence and imprints are all over the Madison landscape including the National award-winning design of the Tenney Park Pedestrian Bridge and the rebirth of the Frank Lloyd Wright inspired Monona Terrace design by helping to build excitement for and create the multi-governmental financing and governance concept to ensure the center’s success. Bud received numerous professional honors throughout his career including Professional Engineer of the Year in Private Practice from the Wisconsin Society of Professional Engineers, Distinguished Service Citation from UW Madison College of Engineering and Outstanding Civil Engineer Award from the American Society of Civil Engineers. Bud was also active with civic interests as he felt strongly about giving back to his community. He was active during the formation of Hospice-Care (now Agrace) and supported the Madison Opportunity Center, Inc for years. Bud served on the Madison Chamber of Commerce Board of Directors as well as the board of trustees for the Madison Art Center. Other community service efforts throughout his career included the Boy Scouts of America Adult Leadership Committee, Middleton Public Works Committee, President of the Mendota/Monona Lake Properties Owners Association and the Edgewood High School Athletic Board. He was also a Director of Downtown Madison, Inc, a member of the UW Madison College of Engineering Committee for Minority Students and served on the UW Platteville Industrial Advisory Board as well as the Shorewood Hills Board of Public Works. As an absolute top priority throughout his life was most importantly being the father of four. At one point, Bud found himself as a start-up business owner, a single parent of four and a heavily committed community and civic leader. All of this might have seemed prohibitively exhausting to most but to Bud it was just who he was and what he did, his absolute essence. In his free time, Bud loved to play recreational softball and tennis with his longtime friends, enjoyed boating, swimming and waterskiing on the Madison lakes and surrounding bodies of water with his family as well as following his beloved Badgers in track, hockey, basketball & football. In 1986, Bud married the love of his life, Judi Schmidt Arnold and they enjoyed the second phase of Bud‘s life together in Manitowish Waters on the chain of lakes from 1993 until his recent death. Judi and Bud together formed a collective loving crew of a combined family self-labeled affectionately as the “Schmarnolds”. The Schmarnold crew will forever be branded with the mark of Judi’s & Bud‘s love for each other & their families. Bud became a Realtor and joined Judi’s firm, Schmidt-haus Realty, Inc., as Broker/Manager of the Minocqua office. He also served on the board of the Minocqua Chamber of Commerce. Bud was preceded in death by his parents, Donald Edward & Lenice Reilly Arnold, daughter Cheri Schmidt Mueller & brother-in-law Joe Kalivoda. He is survived by his loving wife Judi, his children Don & Tamara Arnold, Dave & Mary Beth Arnold, Beth Arnold, Sandy Arnold, Keven & Cary Schmidt, Wendy & William Magee and Jack & Shantel Schmidt, his grandchildren Alexandra & Will Norton, Nick Arnold, Nathan & Anna Kate Arnold, Bobby Arnold, Amanda & Justin Griswold, Jason Arnold, Chris Schmidt, Jerry & Jessica Schmidt, Sarah Alswager, Amber & Philip Williams, Lindsay Schmidt, Max & Rebecca Schmidt and greatgrandchildren Hugo Norton; Taylor Eubank; Gavin, Charlotte and Isaiah Williams; Jahzanna Taylor and Paisley, Phoebe & Dean Schmidt. He is also survived by son-in-law Terry Mueller and his only sister Mary Kalivoda. The family wishes to thank the dedicated and loving physicians and outstanding nursing staff at Marshfield Clinic Hospital in Minocqua. In lieu of flowers, memorial gifts may be made in Bud’s name to Edgewood High School, www.Edgewoodhs.com or to Music in the Park, P.O.Box 165, Manitowish Waters, WI 54545. A Sunday summer event that Bud dearly loved and enjoyed. Please call Judi or Dave for updated Zoom information.

Orville Edward &#8220;Bud&#8221; Arnold died peacefully at the age of 87 surrounded by his family on February 2, 2021 in Minocqua, Wisconsin. Bud was born on September 30, 1933 in Sparta, Wisconsin. At age one his family moved to Madison where... View Obituary & Service Information

The family of Orville "Bud" E. Arnold created this Life Tributes page to make it easy to share your memories.

Orville Edward “Bud” Arnold died peacefully at the age of 87...

Send flowers to the Arnold family.