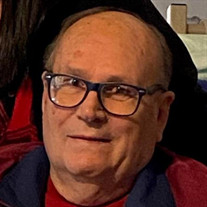 Michael “Mike” A. Pergolski, age 71, of St. Germain, passed away July 24, 2021. Mike was exactly where he wanted to be at his home, in a serene Northwoods setting, with a view of wildlife and surrounded by loving family. Michael was born on April 7, 1950 in Wausau, WI, the son of the late Leonard and Lorraine (Herzog) Pergolski. He attended Wausau Senior High School, graduating in 1968. Upon graduation, Mike was deployed with the United States Army 173rd Airborne Brigade to Vietnam and served from October 1969 to January 1971. He was a recipient of 2 Purple Hearts and 3 Bronze Stars, one being with Valor. He also earned other noble medals for his marksmanship, heroism and good conduct. After returning from the war, Mike was employed with Wausau Papers from 1970 – 1997; he was forced into early retirement at the onset of debilitating health issues. He married Lori (Janz) on May 17, 1991. Despite Mike’s struggles, he continued to be optimistic and live his life to the fullest. Mike enjoyed spending time with family and friends, hunting, fishing (being a fishing guide), watching the wildlife from his Northwoods home and has been a lifelong Dallas Cowboys fan. He looked forward to his Friday fish fry and gin/tonic. When able, Mike and Lori enjoyed traveling the United States and trips to Thailand, Costa Rica and Mexico. Michael is survived by his wife, Lori; daughters, Laurie (Chris) Stone of Weston and Christie Pergolski of Wausau; 3 grandchildren, Haley (Noah) Plautz, Bryce and Makayla; brother, Patrick (Patrice) Pergolski of St. Germain; sister, Shirley (John) Bauman of Mosinee; mother in law, Lorraine Klatt of Stratford; mother of his children, Karen Pergolski of Weston; sister in law’s, Dawn Powers of Colorado and Connie Teale of South Dakota; brother in law’s, Jeff (Krista) Janz and Doug (Nancy) Janz both of Wausau. Mike is further survived by many nieces, nephews, cousins and dear friends and last but not least, his beloved dog, Perkett. Visitation will be from 10:00 AM – 12:00 PM on Thursday, July 29, 2021 at St. Mary’s Catholic Church in Sayner, WI; a Mass of Christian Burial at 12:00 Noon and a Celebration of Life party following at the St. Germain Pavilion. Interment with full military honors will be at 11:00 AM on Friday, July 30, 2021 at Northwoods National Cemetery in Harshaw. The family would like to extend a sincere thank you to family, friends and healthcare who have shown their love through help and prayers over the years and a very special thank you to Paula. In lieu of flowers, memorials may be given to the family for a future memorial to be determined.

Michael &#8220;Mike&#8221; A. Pergolski, age 71, of St. Germain, passed away July 24, 2021. Mike was exactly where he wanted to be at his home, in a serene Northwoods setting, with a view of wildlife and surrounded by loving family. Michael... View Obituary & Service Information

The family of Michael "Mike" A. Pergolski created this Life Tributes page to make it easy to share your memories.