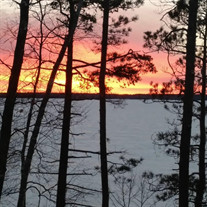 Marvin Lee Hinke January 21, 1930- February 1, 2019 On February 1, 2019, my brothers and I lost the most wonderful father a child could ask for. He was born into a loving family in Stanley, Wisconsin, enjoying his childhood with three brothers and two sisters, all of whom became successful and blessed with their own families. Perhaps it was the result of receiving unconditional love as a member of this very special family that our father gave it so generously to us. Academically, Dad accomplished so much. He graduated from UW Riverfalls, where he played football and saxophone, to go on to medical school at UW Madison. It was in Madison that he was introduced to the love of his life, Helen, by his best friend in life, Richard Holder. Their romance was one for the ages, continuing until his death and beyond. After marrying mom, Dad served in the Army in Texas and Virginia, where they had a daughter, Ann. As his career progressed he practiced medicine in Madison where his twin sons, David and Peter, were born. Later, having made the decision to practice radiology at the Marshfield Clinic, his best friend’s name sake, Richard, was born, the youngest of his four children. During his time at the Marshfield clinic, our parents built their dream home in the countryside of Marshfield, designed by a childhood friend of our father’s. Dad was so proud of that. Throughout our childhoods, our parents provided so many wonderful experiences and showed us so many spectacular places through our travels, here and abroad. It is because of our parents that my brothers and I fell in love with the Northwoods, continuing to vacation there to this day. They also showed us the beauty and wonder of the ocean, thanks to their hospitality at their Florida condo. Beyond all of these blessings, our father’s love for, and devotion to, his family took priority. Nothing made him happier than having all of us together, preferably singing along with his Ukulele playing. A night might often begin with “The Rooster Song,” ending with his rendition of “Goodnight Irene,” leaving tears in everyone’s eyes. In addition to his wonderful sense of humor and love of music, Dad will always be known for his wise words spoken at David’s wedding rerearsal dinner, “Be kind.” So many times, we have reminded one another of that meaningful sentiment. As we reflect on the comments we have received about our dad since his death, it is clear that he will be remembered for exactly what he valued most; kindness. It is not hard to remember our father standing on the porch overlooking the lake at sunset, gin and tonic in hand saying,“ Always remember to be kind.” We will do our best to honor his legacy of love and kindness by letting those words guide us in our lives. In his memory, we ask that you please perform a simple act of kindness and think of Dad. In this way, his legacy will live on. Cheers and love forever, Dad. He leaves to cherish his memory: Beloved wife, Helen Daughter, Ann, and her husband, Jeff Brodek, and their children, Elizabeth and partner, Nick and Andrew and his wife, Adela. Son, David, and his wife, Christina, and their children, Hans, Elsa, and Greta. Son, Peter, and his wife, Kordie, and their children, Mason, Ben, and Evelyn. Son, Richard, and his partner, Dana, and his children, Josie and Milo. And all those who have experienced his kindness, gentleness, and sense of humor during his time here on earth.

Marvin Lee Hinke January 21, 1930- February 1, 2019 On February 1, 2019, my brothers and I lost the most wonderful father a child could ask for. He was born into a loving family in Stanley, Wisconsin, enjoying his childhood with... View Obituary & Service Information

The family of Marvin L. Hinke created this Life Tributes page to make it easy to share your memories.

Send flowers to the Hinke family.