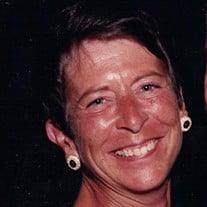 Madonna “Donna” Rudy (nee LaCrosse) On the evening of February 26, 2018, Donna passed away peacefully in her home, surrounded by family, and overlooking the lake. As she passed, she left the most beautiful sunset for us to treasure. Madonna Marie LaCrosse was born in Rhinelander, WI on April 24, 1946 to John and Elvera (Al) LaCrosse. She came into the world with her identical twin sister, Diane, and joined her brothers Wally and Wayne. She lived in Minocqua where her father was caretaker at Camp Minocqua until they moved to Lac du Flambeau where they became caretakers at Camp Wipigaki. Donna graduated from Lakeland Union High School in 1964 and studied at University of Wisconsin – Madison. Following Madison, she moved to Chappaqua, New York where she lived for a short time before moving back to the Northwoods of Wisconsin. Although Donna met Fred at Dillman’s Lodge in the fall of 1960, and enjoyed many years of friendship, it wasn’t until she moved back in the mid 1960s that they began dating. Fred insists that he knew she would be his wife the moment he laid eyes on her, and as he says, he chased her until she let him catch her. She and Fred married on June 22, 1968 at the Methodist Church of the Pines in Minocqua. They would have celebrated 50 years of marriage this coming June. He was the love her life and her best friend. Following their wedding, Donna and Fred lived in Kenosha and Racine and owned/operated an automotive distribution warehouse, K&R Distributors. In 1973 they moved back to the Northwoods. It was then that they began their life on White Sand Lake where she lived the rest of her life. Together they raised three children and lived a life of so many fun adventures, they are impossible to list…. Donna will forever be known for her kindness and generosity. She had an amazing way of welcoming people into her home and her life – filled with joy, laughter, fun and humor. Friends who walked through her door were soon considered family. She made room in her heart for everyone she met. She will be remembered for her love of the outdoors and the ability to see beauty in the small things of life. She was loving and thoughtful and had a wicked sense of humor that made us laugh every single day. Friends near and far would say she made the best chocolate chip cookies and Swedish pancakes in the whole wide world. She was always up for a mean game of cribbage or Scrabble and was a dedicated Packer fan. Donna loved swimming and boating and spending as much time as possible on and in White Sand Lake. Her love of the lake carries on in all of her children and grandchildren. Loved ones who cleared the path for Donna are her father, John LaCrosse, her mother, Elvera (Al) LaCrosse, and brothers Wayne and Wally Brown. Loved ones who will miss Donna until they meet again are her husband, Fred Rudy, daughter Hillary Anderson (Jim Feierstein), daughter Brooke (Jason) DeVries and son Fritz (Tara) Rudy, sister Diane LaCrosse Baarlaer and 5 grandchildren who she loved beyond measure: Parker Anderson, Nora and Avery DeVries and Friedrich and Evelyn Rudy. In addition to her immediate family, she had many cousins, nieces and nephews whom she adored. And so the story goes until we see our beautiful wife, mother, sister, Nanny and dear friend again. She will be greatly missed, deeply appreciated, abundantly loved and joyfully celebrated. Donna’s family would like to extend a very special thank you to the Dr. Kate Hospice team. Their authentic kindness and care over the past several months has been nothing less than extraordinary. Visitation will be held at Bolger Funeral Home in Minocqua, WI on Saturday, March 3 from 1-2:30pm with a short service beginning at 2:30. In lieu of flowers, Donna and her family request that a donation be made to HYF- Dr. Kate Hospice, P.O. Box 770, Woodruff, WI 54568.

Madonna &#8220;Donna&#8221; Rudy (nee LaCrosse) On the evening of February 26, 2018, Donna passed away peacefully in her home, surrounded by family, and overlooking the lake. As she passed, she left the most beautiful sunset for us to treasure. Madonna... View Obituary & Service Information

The family of Madonna "Donna" Rudy created this Life Tributes page to make it easy to share your memories.

Madonna “Donna” Rudy (nee LaCrosse)
On the evening of February...

Send flowers to the Rudy family.