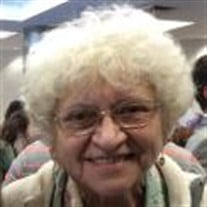 Lynda Louise Froebel “Wilma”, age 74, passed away suddenly on Tuesday, March 22 at her home in Arbor Vitae. Lynda was born to the late Norman and Mary Sadler on June 8, 1947 in Janesville, WI. She graduated from Craig High School in Janesville where she excelled in music and band. She was well known for playing the marimba and especially famous for playing “The Flight of the BumbleBee”. She also was incredibly talented at baton twirling, which she loved teaching to her granddaughters. In her early adulthood, Lynda also taught dance for 13 years at Sadler’s School of Dance in Janesville, WI. Along with former spouse, William, Lynda moved to Minocqua, WI in 1980 and operated the Pines Motel and raised three children; Robert Froebel, Judith (Gary) Boisvert, and Leanne Froebel. She was well known by many people in the Lakeland community as a result of working at the motel. She then later worked at Super 3 Foods, Island City Lanes, Park City Credit Union, and lastly, Book World. She was very involved in both the Minocqua and Woodruff bowling leagues, serving as secretary for many years for the women’s bowling leagues. She was given the nickname “Wilma” at Island City Lanes and was recognized as Wilma for the rest of her life. She was well known at the drive-up window at Park City Credit Union and loved interacting with customers there. Lynda had to be the Green Bay Packers’ biggest fan. She wore something “Packers” everyday. She never missed a Packer game and would argue with anyone that wasn’t a Packer fan. She passed her love of Green Bay on to her children and grandchildren and loved to talk football with them. Lynda loved spending time with her three grandchildren and celebrating all of their accomplishments. She was immensely proud of them. Lynda is survived by two brothers: William (Cindy) Purnell, of Janesville; Norman Sadler of Janesville and a sister, Karen Rehberg of Des Moines, IA; as well as numerous nieces and nephews. She is also survived by her three children: Robert Froebel of Merrill; Judith (Gary) Boisvert of Minocqua; and Leanne Froebel of Marshfield; as well as three grandchildren; Thomas, Jaeden, and Natalie Boisvert. She was predeceased by her parents, Norman and Mary Sadler; Step-father, Rudolph C. Wuksinich; brother, James Purnell; sister, Judith Wagner; step-brother, Rudolph(Butch)Wuksinich; nephew, Timothy Purnell. Lynda’s lively personality will be missed by family and friends, but remembered forever. A service of remembrance will be at Calvary Lutheran Church, Minocqua, on Saturday, April 9 at 10:00 am. In lieu of flowers, memorials can be made to Calvary Lutheran Church or as a donation in memory of Lynda to the Oneida County Humane Society.

Lynda Louise Froebel &#8220;Wilma&#8221;, age 74, passed away suddenly on Tuesday, March 22 at her home in Arbor Vitae. Lynda was born to the late Norman and Mary Sadler on June 8, 1947 in Janesville, WI. She graduated from Craig High School... View Obituary & Service Information

The family of Lynda "Wilma" L. Froebel created this Life Tributes page to make it easy to share your memories.

Send flowers to the Froebel family.