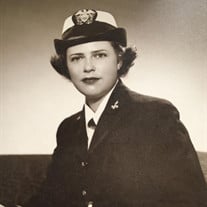 Lucille (Lu) Albrecht (age 100) entered eternal life on September 10, 2021 at Marshfield Hospital. She was born on February 2, 1921 in Janesville, Wisconsin to Harald and Helga (Gyving) Pedersen, both preceding her in death. Lu graduated from Janesville High School in 1938 in the midst of the depression. Her father died when she was a sophomore in high school. Upon graduation, she began working as a secretary in a local law firm where she remained until she enlisted in the Navy WAVES in 1942. Her Naval service began when she received orders to attend indoctrination at Oklahoma A&M University in Stillwater. Upon completion of the program, she was assigned to the Navy Department's Bureau of Ships in Washington, D.C., where she served as a yeoman until she applied for Officer's Training School and entered the Midshipman's Program at Smith College in Massachusetts. Upon graduation, she received her commission as an ensign and was reassigned to the Bureau of Ships where she served until the end of World War II. She retired in 1945 at the rank of Lt. (j.g). Lu was a participant in the Never to be Forgotten Honor Flight to Washington, DC in 2011. At the conclusion of World War II, and on November 10, 1945, at First Lutheran Church in Janesville, WI, she married her fiancé, Raymond Albrecht, who had just returned from the European Theater of Operations serving as a command pilot and flight leader. They made their home in Alexandria, Virginia where they were blessed by the birth of their daughter, Peg. While living in Virginia, Lu was employed as a legal secretary to the U. S. Attorney for the Eastern District of Virginia and was involved in preparing legal documents in two major cases, one of which was argued and decided by the U.S Supreme Court in Washington. Lu had a lifelong interest in photography and following her retirement, studied at the Northern Virginia Community College. After moving to Minocqua, she joined the Photographic Society of America where she competed internationally in nature photography. She was listed in PSA's “Who's Who in Photography'. Lu and her husband were both charter members of Ascension Lutheran Church in Minocqua and also Peace Lutheran Church in Alexandria, Virginia. She was the first secretary of Ascension during its founding. In addition to photography, her hobbies included Norwegian baking, hiking, attending concerts and plays, and watching the Green Bay Packers football games. Through the years, she was active in Ascension Lutheran Church, Sons of Norway Lodge, Lakeland Senior Center, Lakeland Vintage Auto Club, and the Lakeland Art League. Besides her parents, she was preceded in death by her husband, Raymond Albrecht, two brothers, Harold and Erling Pedersen, two sisters, Hjordis Knutson, and Signe Pedersen. She is survived by daughter Peg Albrecht, son-in-law, Sigmund Rannem, two granddaughters, Sonja-Liv Rannem (Murguia), Kaia Rannem (Frank), great grandson James Alexander Frank and several nieces and nephews. A memorial service celebrating her life will be held at Ascension Lutheran Church on Friday, October 8, 2021 at 11:00 A.M. with visitation beginning at 10:00 A.M. Interment will follow the service at the Ascension Columbarium and a reception in the fellowship hall. In lieu of flowers, donations may be made to Ascension Lutheran Church in Minocqua, or the Wisconsin Talking Books and Braille Library , 813 West Wells St., Milwaukee, Wi 53233-1436.

Lucille (Lu) Albrecht (age 100) entered eternal life on September 10, 2021 at Marshfield Hospital. She was born on February 2, 1921 in Janesville, Wisconsin to Harald and Helga (Gyving) Pedersen, both preceding her in death. Lu graduated from... View Obituary & Service Information

The family of Lucille Albrecht created this Life Tributes page to make it easy to share your memories.

Send flowers to the Albrecht family.