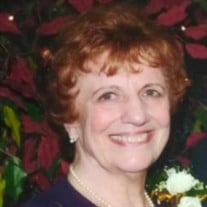 Lorene ("Lori") Imbery of Watersmeet passed away peacefully on Thursday, September 17. She was 80 years old. Lorene was born to Louise and Frank Basso on December 4, 1939, in Ironwood. She grew up in Ramsay, Jesseville, and Ironwood, where she attended school through her sophomore year. Her parents then relocated their family to Watersmeet after building the Sunset Motel. Lorene graduated high school in 1957 and was always proud to have been a Nimrod cheerleader. She attended airline training school in Milwaukee and started working there as a reservationist for North Central Airlines. After work one Friday night at a bar with friends, she met a very handsome fellow named Lou Imbery. He soon became her life-long love. Lori and Lou were married on January 16, 1960, at Immaculate Conception Catholic Church in Watersmeet. They made their first home in Milwaukee, where their children Lynn and Scott were born. The family followed Lou's career moves to Minneapolis/St. Paul, back to Milwaukee, and in 1970 to Hazel Crest, IL, in the southwest suburbs of Chicago. That same year, Lori got a part-time job as a travel agent at Homewood Travel Agency, leveraging her previous airline experience. Her career quickly grew, and she became a Certified Travel Consultant and manager of the agency. She had many loyal customers during her decades at Homewood Travel (most memorable was Muhammad Ali's wife at the time, whose parents lived in the area). She was later the manager of Diamond Point Travel Agency for several years. She had close friendships with her agency colleagues. Working in the travel industry afforded Lori and Lou the opportunity to travel the world. They especially liked exploring Europe and cruising the Caribbean. Even with a full-time career, Lori still cooked a full dinner every night and was a perfectionist homemaker, as her family was her top priority. She retired from "telling people where to go" in 2001. Some years earlier, Lori and Lou had relocated to Crete, IL, where they enjoyed a fun neighborhood of good friends. In the spring of 2001, they made their home on Beatons Lake in Watersmeet. They both appreciated coming back to small-town living but Lori did miss shopping malls, as she adored nice clothes and always wanted to look her best. For all of her life, Lori loved to sing and dance -- especially ballroom and country western (and even belly dancing in earlier days!). Lori and Lou spent nearly every Saturday night at the casino in Watersmeet enjoying the live music and dancing. Watching them glide effortlessly across the floor was truly a thing of beauty. Lori is survived by her beloved and devoted husband Lou; daughter Lynn Davies in Paulding; son Scott (Lorna) Imbery in Copper Canyon, Texas; grandchildren Neil Imbery, Alex Imbery, and Olivia (Justin) Williams, and great-granddaughter Noelle Williams, all in Texas; sister Joan Moll in Watersmeet, brother-in-law Harlan Imbery, sister-in-law Lorna Imbery, uncle Ray Basso, special cousins, nieces, and nephews, and treasured friends. Lori was an active member of Immaculate Conception Catholic Church. Funeral arrangements are being postponed due to COVID.

Lorene ("Lori") Imbery of Watersmeet passed away peacefully on Thursday, September 17. She was 80 years old. Lorene was born to Louise and Frank Basso on December 4, 1939, in Ironwood. She grew up in Ramsay, Jesseville, and Ironwood, where... View Obituary & Service Information

The family of Lorene "Lori" J. Imbery created this Life Tributes page to make it easy to share your memories.

Send flowers to the Imbery family.