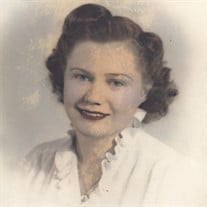 Lois Jeanne Elliott died of natural causes on November 16, 2018, in Minocqua, Wisconsin. She was 94 years old and had been a resident of the Lake Shore Assisted Living Home since 2013. She had suffered from dementia for the past several years. Mrs. Elliott was born to Marie and Richard Allen on October 3, 1924 in Chicago, IL. She remained in Chicago during her childhood, where she attended Fort Dearborn and Bass Elementary Schools, and graduated with honors from Englewood High School in 1942. She subsequently attended business school, and took pride in having worked in the early stages of data processing. Lois married Gordon William Elliott in 1946. They moved from Chicago to Elmhurst, Illinois in 1952, where they raised three children and remained for the duration of their active adult lives. Lois and Gordon became charter members of Elmhurst Presbyterian Church in 1953, where they were active for over ten years. They subsequently joined St. Peter’s Church in Elmhurst, where Lois was a Deacon and where they worshipped for many years. After raising her children, Lois worked in the Elmhurst College Finance Office for over a decade. Lois enjoyed traveling and playing golf in her retirement. Lois and her husband took numerous trips, both domestic and abroad. Lois was preceded in death by her husband, Gordon, who died in 2004. She is survived by her sister, June Haasler, of Wonder Lake, IL; her daughter, Maureen Karen Juras (Joe), of Minocqua, WI; her sons Richard Allen Elliott (Karen), of Annapolis, MD, and David William Elliott (Kirsten), of Villa Park, IL: four grandchildren, and three great-grandchildren. There will be no funeral service. A memorial service will be held in Elmhurst, IL at a later date to be determined. The family requests that any gifts me made in the form of a donation to the Alzheimer’s Foundation or Alzheimer’s Association.

Lois Jeanne Elliott died of natural causes on November 16, 2018, in Minocqua, Wisconsin. She was 94 years old and had been a resident of the Lake Shore Assisted Living Home since 2013. She had suffered from dementia for the past several years. Mrs.... View Obituary & Service Information

The family of Lois J. Elliott created this Life Tributes page to make it easy to share your memories.

Send flowers to the Elliott family.