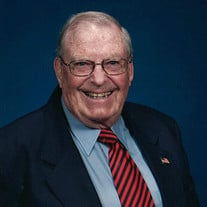 Lloyd James (Jim) Broeren was called home by the Lord to his heavenly home Nov. 25 at the age of 90. Jim was born Feb. 12, 1929 in Marshfield, Wis., to Theodore and Helen Broeren. He was raised in Medford, Wis., and graduated from Medford High School, where he was a member of the 1946 state championship hockey team. In 1950, Jim enlisted in the United States Air Force and was stationed at Ramstein Air Base in Germany. He married his high school classmate Dorothy Neumueller on the base March 1, 1953. Jim and Dorothy moved to Minocqua, Wis., in 1957. Jim was a manager at Lakes Propane Gas Co. until 1966, when he became an insurance representative for Aid Association for Lutherans. He retired from AAL in 1991. In retirement, Jim drove a van for MTS/Abbey Vans, providing transportation for elderly and disabled individuals. Jim was an avid golfer and won the 1977 club championship at Minocqua Country Club. He also enjoyed fishing and hunting. He was a passionate sports fan and loved the Badgers, Brewers, and Packers. He held Packers season tickets for decades and was seated at Lambeau Field for the Ice Bowl. Jim was a longtime member of the Madsen-Empey American Legion Post 89 in Minocqua. He was an active member of Trinity Lutheran Church in Minocqua and served as president. He was honored to have participated in the Never Forgotten Honor Flight program in 2013, where he was accompanied by his eldest daughter, Lynne Beverung. Jim loved his wife and four daughters dearly, and was a caring and supportive grandfather to his grandchildren, who affectionately referred to him as "Papa." Jim is survived by his wife, Dorothy; brothers Roy and Jack Broeren; daughters Jeanne Gauthier, Barbara (Charles) Schneider, and Leslee (Jeff) Skebba; eight grandchildren and five great-grandchildren. He was preceded in death by his sister Carol Larkee and daughter Lynne (Bob) Beverung A memorial service will be held Saturday, Dec. 7 at 11 a.m. at Trinity Lutheran in Minocqua, 8781 Brunswick Rd., with a luncheon to follow. Visitation will commence one hour prior to the service. In lieu of flowers, memorial contributions may be made to Trinity Lutheran Church, Madsen-Empey American Legion Post 89, PO Box 678 Minocqua, WI 54548 or Dr. Kate Lakeland Hospice c/o HYF Dr. Kate Hospice PO Box 770 Woodruff, WI 54568. Bolger Cremation and Funeral Services of Minocqua and Woodruff is assisting the family. www.bolgerfuneral.com

Lloyd James (Jim) Broeren was called home by the Lord to his heavenly home Nov. 25 at the age of 90. Jim was born Feb. 12, 1929 in Marshfield, Wis., to Theodore and Helen Broeren. He was raised in Medford, Wis., and graduated from Medford High... View Obituary & Service Information

The family of Lloyd "Jim" Broeren created this Life Tributes page to make it easy to share your memories.

Lloyd James (Jim) Broeren was called home by the Lord to his...

Send flowers to the Broeren family.