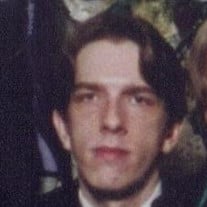 Kevin Robert Malek, 47, Rhinelander WI, passed away unexpectedly on Dec. 26, 2019 in Madison, WI at the UWMadison hospital. He was preceded in death by his son Alexander Joseph Malek-Laraia (Woodruff WI), His grandmother Rosalie (nee Berdziak) Malek (Springstead,WI) his Aunt Elaine (nee Malek) Vissers (Mercer,WI), and his godfather Wm T Zucek of Minooka, Illinois. He is survived by his wife Jennifer Malek (nee Scelsi) Rhinelander, WI, his parents Robert and Joan Malek (nee Adkins) of Minocqua,WI, and his sisters Kimberly Miller (Appleton WI), Kathlene LeClair (Minocqua, WI) Karen Malek-Wildenberg (Hazelhurst, WI), his aunts Vicki Swift (nee Adkins) (Rockwell, NC,) and Cheryl Malek (Park Falls WI), cousins Tammy Cook, Stephanie Valentine and Gretchen Vissers, his nieces Josie, Bella, Kennedy, Kristi, Jessica, his nephews Joshua, Patrick, Kyle, Joseph, Jonathan, and many friends whom he was very close to. Kevin graduated from MHLT grade school and attended LUHS in Minocqua WI. He was then home schooled via the Clonlara off campus program where amongst his curriculum he earned credit by pursuing one of his passions in art where at 17, his cartoons were published in the Iron County Miner, Hurley WI. and he attended an art class at Nicolet College. He was also a volunteer of Passport in Time where he was involved in archaeological activities in the northern Wisconsin National Forests. He then earned his Clonlara Private High School diploma. Besides art, he was very musically talented, playing guitars and drums. From the time he was a child, he has always been interested in the paranormal. After years of study, he became a paranormal historian and founded the Northern Wisconsin Paranormal Society LTD. With other members, they investigated cemeteries, abandoned houses, residential homes and commercial buildings for ghosts. Then they went into the deep woods "squatching" - searching for Bigfoot. He was also a former Certified Field Investigator of MUFON (Mutual UFO Network). He then married Jennifer Scelci who is psychically gifted, and they hosted various paranormal radio shows and also appeared on many shows and programs He was a guest speaker at paranormal conventions in Chicago Illinois, Milwaukee WI, Des Moines IA, and Menomonee WI. Kevin was a contributing writer for Paranormal Daily News, Paranormal Chronicles, and Supernational Magazine and others. In Kevin's memory, his worldwide colleagues have put together tributes in his honor online. He was legendary. A memorial will be held on Saturday, Jan. 11, 2020 at Bolgers Funeral Home in Woodruff, WI at 1pm to 3pm. A celebration of life will be held at Preuss's Pub afterwards

The family of Kevin R. Malek created this Life Tributes page to make it easy to share your memories.

Send flowers to the Malek family.