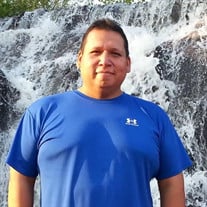 Keith Milton Birdsbill, Biiwaabiko Wininni “Iron Man”, died on March 18th, 2022. He was 48 years old. Born in Chicago, IL, January 21st 1974. He was the only child of Judy Birdsbill and the late Monte Lewis. Keith was raised in Chicago, Washington DC and Lac Du Flambeau. In his younger years he was a wrestler and a football player. After graduation from Lakeland Union High School he worked in all aspects of the gaming industry, attended college and various trade schools to hone his many interests and talents. Keith enjoyed travel and adventure and found himself living in various locations throughout the country, from the mountains to the ocean before finally finding his way back home to Lac Du Flambeau. He was gifted in cabinetry making, construction, accounting, welding, small engine repair, technology and just about anything. He loved to figure things out. He was a real handyman and could fix anything. Keith was the type of person who helped people on the drop of a dime and would offer words of encouragement, empathy, advice or laughter. He enjoyed bargaining, marvel movies and finding the best place to eat. He was fascinated by science fiction, mystery and the unknown. Keith was a straight talker that he wittingly combined with his sense of humor. He was loved and respected by many. During his last days in the hospital, he was surrounded by his loving family. Keith was preceded in death by his maternal grandparents, Spencer and Marian Smith and his paternal grandparents. He leaves to cherish his memory; his soulmate, Patricia Pete; four children, Sierra Birdsbill, Hannah Robenhorst, Sage Birdsbill and Mindy McPherson; his mother, Judy Birdsbill; his children’s mother, Fern Orie; a host of aunts, uncles, cousins, nieces, nephews, family and friends. Visitation will begin at 4:00 PM on Tuesday, March 22, 2022 at the Multi Purpose Building in Lac du Flambeau. Services will begin at 10:00 AM on Wednesday, March 23, 2022 at the Multi Purpose Building followed by interment at Memorial Cemetery in Lac du Flambeau.

The family of Keith "Biiwaabiko Wininni" Birdsbill created this Life Tributes page to make it easy to share your memories.

Send flowers to the Birdsbill family.