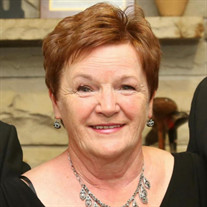 Judith Kay Swartz, 79, of Minocqua Wisconsin, passed away on January 16 in her home, surrounded by her family. She was born May 28, 1941 in Elroy, WI, the daughter of Andrew and Leona (Rickey) Nelson. She was a 1959 graduate of Elroy High School. After graduation, she moved to Zion, IL where she met the cute young man who was always late for church, Charles V. Swartz. They were married June 16, 1966. Charles and Judith spent several years in Wonewoc and Janesville, WI. They raised their children in Edgerton, WI. Judith kept a spotless home and spent time sewing and crafting. After retiring to Blue Lake in Minocqua, Judith began quilting. Her quilts were impeccably crafted and beautiful. She took great pride in her work and enjoyed sharing them with loved ones. She was highly active and took up paddle boarding at the age of 73. Judith is survived by her loving husband Charles, sons Curtis (Candice) Swartz of Reedsburg, Bradley (Diane) Swartz of Minocqua, daughter Heidi (Troy) Melton of Orfordville. She left four grandchildren Alex (James) Sweetman, Nicholas Melton, Casey Swartz, and Codey Swartz. She had two great grandchildren, James, and Felix Sweetman. She is also survived by sisters Shirley (Frank) Thomas and Phyllis (Patrick) Tangney, brothers Gordon (Sally) Nelson, Larry (Mary Jane) Nelson, Rick (Kathy) Nelson, Brothers-in -law John Swartz, and Ed (Diane) Swartz, and Sister-in-law Judith Reinke, and many nieces and nephews. She was preceded in death by her parents Andrew and Leona Nelson, siblings Gerald, Joyce, Gene, Dale, William, Robert, Ross, and Keith Nelson, and brother-in-law Joseph Swartz. She will be missed by many and remembered for her beautiful smile, soft voice, her kindness, and generosity. Cremation services have been arranged by Bolger Cremation and Funeral Services of Minocqua and Woodruff. She will be buried in Elroy near her family. A celebration of life will take place at a later date. The family would like to give a special thank you to her sister Shirley and nieces Tanja and Tammy for racing to her side to care for her in her last moments and for supporting the family.

Judith Kay Swartz, 79, of Minocqua Wisconsin, passed away on January 16 in her home, surrounded by her family. She was born May 28, 1941 in Elroy, WI, the daughter of Andrew and Leona (Rickey) Nelson. She was a 1959 graduate of Elroy High School.... View Obituary & Service Information

The family of Judith Kay Swartz created this Life Tributes page to make it easy to share your memories.

Judith Kay Swartz, 79, of Minocqua Wisconsin, passed away on...

Send flowers to the Swartz family.