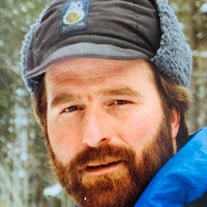 Jon D. Iltis, age 64, of Boulder Junction, WI passed peacefully December 24th, 2019, in the house that he built on the Manitowish River. Jon was born in Appleton, WI on March 5, 1955. Jon graduated from High School in Neenah, Wisconsin in 1973. From then on, his life revolved around being outside, fostering others’ love of the outdoors, and planning extended outdoor trips with his family and many friends. He attended the University of Colorado Boulder and graduated with a degree in Outdoor Recreation in 1980. Jon also attended courses at the National Outdoor Leadership School (NOLS) in Lander, WY, and, using these skills and his extensive personal experience, played a pivotal role in establishing the Outpost Leadership Program at Camp Manito-wish, YMCA (“Camp”), in Boulder Junction. Jon’s impact at Camp Manito-wish was monumental. He first attended as a camper in 1968, and continued the connection for 45 years, spending a single year away. He led Camp’s first Expeditionary Canuck - a 40 day unsupported canoe trip covering over 600 miles in the Northwest Territories of Canada and ending at Eskimo Point – in 1978. They had no satellite phones and saw no one along the way. One of his trip-mates recalls asking Jon how they would contact help in an emergency, to which Jon replied, “We’ll just flag down the next plane”. Jon had to admit that he had been hoping no one would notice when it was pointed out that they had not seen a plane in 20 days. Jon’s gift was teaching self-reliance and preparedness in the outdoors and at the same time helping others to appreciate the earth and to have fun recreating outdoors. Jon led other major trips including a second “Expo”, and thus was crucial in organizing and laying the groundwork for Camp’s long canoe trips in Canada as well as month-long Western backpacking trips, all of which helped secure Manito-wish’s legacy as one of the foremost outdoor tripping camps in the world. Jon began as property manager of Camp in 1982. He married Sharon (Smith) Iltis in 1988. Together they raised their sons Nathan and Brian at Camp, living there for 25 yrs. With his intimate knowledge of how Camp functioned, Jon managed full-time staff and helped design and build most of the major buildings at camp, including the renovation of the historic Nash Lodge, which is used every year for the Community of Boulder Junction’s well-known Colorama Dinner. Jon and his family were some of the only people at Camp full-time during the winter months for many years. Jon began the first winter program from the office in his house, and designed and groomed the existing cross-country ski trails for the winter program. Jon had an incredible network of friends, and was great at bringing people together. He combined his friends from college with his Camp friends and formed a dynamic group of outdoor adventurers that were his lifelong family friends. Camp alumni and visitors who attended winter events and supported the Camp year-round also became very close with the Iltis family. Above all, Jon loved his boys and spent many hours sharing the life he created for them on beautiful Boulder Lake, always challenging their outdoor skills with a supportive attitude. Jon was very connected to the Boulder Junction community. He was a Boulder Junction volunteer fireman, a member of the Boulder Junction Lions Club, the Community Church, and volunteered for the food pantry and many other Boulder Junction Community events. Jon’s spirit was nourished by walking through quiet woods, paddling on lakes and streams and exploring mountains. He held tight to his values for the good of the land. Those of us who got to join his journey were fortunate. He will be missed however never forgotten. Jon is preceded in death by his parents Charles and Betty (Kletzien) Iltis. He is survived by his two sons, Nathan and Brian Iltis, 28 and 25, Sharon, and siblings Charles “Skip” Iltis and Barbara Morley. Condolences, photos, and other memories can be shared at Jon’s page on the Bolger Funeral Home website: https://www.bolgerfuneral.com/obituaries/Jon-Iltis/. In lieu of flowers, please send memorials to Camp Manito-wish YMCA P.O. Box 246, Boulder Junction, WI 54512, and will be used for the Restoration of the Camp Manito-wish Historic Waterfront project. Checks can be made out to Camp Manito-wish YMCA. Brian, Nathan, Sharon, and Jon’s immediate family have spoken to many many friends interested in attending a public service, and have decided they are not comfortable with so many people they care about being driven to travel, gather closely, and inevitably embrace while the virus is still at large. They are going to hold an intimate family gathering across the river, at the cabin Jon built, share words and spread ashes together. Brian and Nathan are going to take some of Jon’s remains back to Montana with them, where they can climb the Grand Teton together and let them drift away on the wind. Jon always dreamed of climbing that mountain with his kids, and told them so often. Plans to do a virtual service have been canceled. There may be another public service when times are less apocalyptic to offer everyone more closure, and we are still planning on working with Camp Manitowish to have a memorial event at Memorial Day Work Weekend 2021. We invite everyone to join us then, when we can share words, photos (Nathan has been scanning thousands of slides), memories, and help Camp kick off a great summer programming comeback! We have been loving the many posts we have seen on the Bolger Funeral Website tribute wall above, keep them coming! Please check back for updates once there’s a vaccine. Much Love, The Iltis Family There is a Northwoods Farewell to Jon Iltis at the Boulder Junction Community Church at 11:00 AM on August 7, 2021.

The family of Jon D. Iltis created this Life Tributes page to make it easy to share your memories.

Send flowers to the Iltis family.