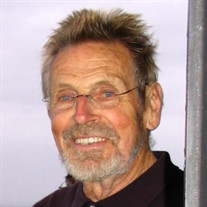 On New Year's Eve 2020, John Albert Emil Nelson, loving husband, father, grandfather, and great grandfather, passed away at 90 years of age. John was a first generation American, born February 18, 1930, in Janesville, Wisconsin to Emil and Pauline Nelson (Nilsson), who had a beautiful farm in Darien. He worked on the farm with his family until being drafted into the United States Army to fight in Korea with an artillery battalion. September 12, 1959, he married Donna Jean Andrew, to whom he was a faithful and loving husband. They raised one son, Thomas John, to whom he was an excellent father. He was also cherished by his daughter-in-law, Kathleen, his two grandchildren, Matthew and Emily, and got to meet and love his new great-granddaughter, Aurelie. His entrepreneurial spirit led him to run several small businesses. He eventually became a painter and wallpaper hanger, which amazingly led to a career as a superintendent and project manager with two major construction companies. He was sent all over the country to manage the construction of large medical and dental buildings. He eventually opened Nelson Decorating Service with his beloved wife, in Harvard, Illinois. He went back into heavy construction until 1977, when he, along with his family, moved to Lac du Flambeau and started Nelson Construction, where he specialized in remodeling, additions, garages, and decks. Work was always an important part of John's life; he valued being a productive member of the community, and always strived to put 100% into anything he did. He also built many friendships along the way. John and Donna built a home in Arbor Vitae after retirement, where they lived until their passing. They spent their winters in their motorhome in Alabama, which they also traveled in extensively during the summer months. John was preceded in death by his parents, wife, brothers Edward and Kenneth, and sister Violet (Hahn), but he is survived by his sister, Ethel (Schuppener), as well as his son, daughter-in law, grandchildren, and his great-granddaughter. A funeral service will be held at Bolger Funeral Home in Woodruff on Saturday, January 9th at 11 a.m., visitation begins at 10 a.m.. Due to the pandemic and winter conditions, in-person attendance is expected to be light; the family has full understanding for those unable to attend. Participation via Zoom will also be possible. Please contact 715-356-3200 for more details. If planning to attend, please RSVP as there will be a catered reception after the burial. Zoom Information John Nelson Funeral Service Time: Jan 9, 2021 11:00 AM Central Time (US and Canada) Join Zoom Meeting https://us02web.zoom.us/j/4041247292?pwd=QlM2b0dnaEplV3RCSGVPSndLTkNHUT09 Meeting ID: 404 124 7292 Passcode: K2PTfX

The family of John Albert Emil Nelson created this Life Tributes page to make it easy to share your memories.