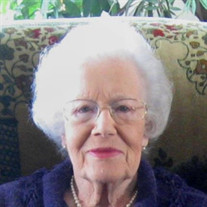 Joan B. (Walker) Dionne died Oct. 25, 2019, at Milestone Senior Living in Woodruff, Wisconsin. She recently celebrated her 100th birthday in high style with a rousing family party at Jacobi’s. Joan was born in 1918 in Newcastle upon Tyne, England, growing up to work as a bookkeeper and eventually to serve in the Royal British Air Force during WWII. Franklin “Curly” Dionne, an American airman and Minocqua native, met her at a wedding of their mutual friends, and he charmed her into becoming his bride in Sept. 1944. Joan waited a year after Frank’s return to the U.S. and traveled on a hospital ship to reunite with him, only to be transported into the “perils” of life in the Northwoods. Her British family imagined her a pioneer living on the frontier under constant threat of marauding bears. Surviving several of Frank’s deployments, Joan raised sons David and Michael in long stretches of single parenting with the help of Frank’s Wisconsin family. This resilience carried her for years to come as she followed Frank across the United States and beyond, including business assignments in Japan, Indonesia, and Hawaii. Joan learned to drive in her 50s, braving the New Jersey Turnpike and vowing she would never miss an opportunity to shop or take a class. She continued to drive until age 95. Joan was an expert knitter, producing outfits and accoutrements for her growing collection of grandchildren, as well as prayer shawls to supply the church. Her “coffee” girls were the special friends who made her later years full of socializing and sharing. Joan loved to read, write letters, cook, golf, watch birds, and travel with Frank. Once technology permitted, she enjoyed video phone calls with her family in England. She embraced the magic of FaceTime chats and found them quite novel. Survivors include her beloved sister, Cynthia of Rothbury, England; sons David (Holly) Dionne of Minocqua and Michael (Noreen) Dionne of Fernandina Beach, FL; and sister-in-law Phyllis Hunt of Fort Meyers, FL. Joan’s joy was compounded by grandchildren Ryan (Jenn) Dionne of Skillman, NJ; Erin (James) Rizzi of Glenwood, NJ; Katie (Randy) Krickeberg of New Berlin, WI; Meg Dionne of Milwaukee, WI; and Kelsey Dionne of Minocqua, WI. She was further blessed by her great grandchildren Taylor Dionne, Sean Calkin, Megan Calkin, David Krickeberg, and Isaac Krickeberg. Joan spent many hours guiding and nurturing her grandchildren, always patient and full of stories of merry old England and her family’s colorful characters. Each grandchild and great grandchild bears her imprint, and it is one that each will cherish. Preceding Joan in death was her spouse, Franklin Dionne; her parents, Margaret and Thomas Walker of Newcastle, England; and her siblings Stella Crone, Mona Rutherford, and Reginald Walker. Joan lived her life as a generous contributor to her community and church, holding many offices and donating countless hours volunteering at HYMC, for the Timber Ridge Homeowners Association, etc. Those who knew her saw her generous spirit, independence, and resiliency as the hallmarks of her classy and gracious nature. From foreign diplomats to store clerks, everyone sought her conversation, storytelling, and famous dinner parties. Her very British charm made her a favorite wherever she went, even as many wondered, “What’s that accent?” The family wishes to thank the staff and caregivers of Milestone Senior Living of Woodruff. Their empathy, care, and friendship were a great comfort to Joan and her family. A memorial service will be held at United Methodist Church of the Pines in Minocqua on Nov. 4, 2019. Visitation will begin at 10 a.m., followed by an 11 o’clock service and luncheon at the church. Pastor Mark Gilbert will officiate. In lieu of flowers, please assist the family with a memorial supporting St. Jude’s Children’s Hospital (262 Danny Thomas Place, Memphis, TN 38105); Ascension/Dr. Kate Hospice (1571 Highway 51 North; Ste. C; PO Box 770, Arbor Vitae, Wisconsin 54568); or United Methodist Church of the Pines (415 Chippewa St, Minocqua, WI 54548).

Joan B. (Walker) Dionne died Oct. 25, 2019, at Milestone Senior Living in Woodruff, Wisconsin. She recently celebrated her 100th birthday in high style with a rousing family party at Jacobi&#8217;s. Joan was born in 1918 in Newcastle upon Tyne,... View Obituary & Service Information

The family of Joan B. Dionne created this Life Tributes page to make it easy to share your memories.

Send flowers to the Dionne family.