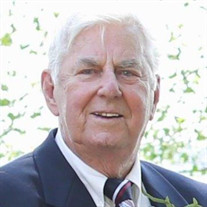 Jerry Parke Meyer, at the age of 90, passed on peacefully at his home in Lac du Flambeau, Wisconsin, with his wife Loraine at his side, after many episodes of illness over the months prior. Despite his condition, he insisted on traveling to... View Obituary & Service Information

The family of Jerry Parke Meyer created this Life Tributes page to make it easy to share your memories.

Jerry Parke Meyer, at the age of 90, passed on peacefully at...

Send flowers to the Meyer family.