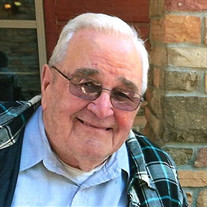 James (Jim) William Wierichs entered his eternal life on October 16, 2019, age 87, at Diane’s Place in the Northwoods, Eagle River, Wis. Jim was born April 10, 1932 in Conover to George Louis and Anna Mary (Schroeder) Wierichs. He attended Conover grade school, fondly recounting a 6th grade trip with his class mates from Star Lake on a train to the Wisconsin Dells, staying over night in the Dells and returning the next day per train to Star Lake. He embarrassly told of goofing around in 8th grade and accidently spilling ink down the back of the girl sitting ahead of him. He said “I got in trouble and was embarrassed.” Jim attended Eagle River High School, playing guard on the football team all four years with his brother Bud and Nephew Louie. He graduated in 1950. He worked picking potatoes at a young age in Eagle River. He learned to drive at a young age driving the families’ 1928 Model A. He worked at the Phelps Christensen Lumber Mill before being drafted into the US Army, from 1952 – 1954, as Military Police stationed in Illinois, Indiana, Alabama and Kentucky. After discharge from the US Army he worked at Burkoltz Chevrolet in Minocqua, Wis before employment at the White Pine Copper Mine. He worked in many roles, lastly as Master Mechanic working at the White Pine Copper Mine for 32 ½ years, retiring at age 55. He enjoyed hunting and fishing with his family, putting up hay, collecting guns and helping anyone in need. He loved to dance, especially Polka. He loved to sing, many times with brother Bud and with Myron and Willy’s band. Jim sang ‘Blue eyes crying in the rain’ at the last Wierichs Family Reunion, to a standing ovation. Jim is the last surviving member of George and Anna’s children. He always watched out for and helped his siblings. He is preceded in death by his parents, sisters: Louise, Frances, Anna, Genivieve, Ruth and Elizabeth, brothers: George and Louis, 5 nieces and 5 nephews. He is survived by 24 nieces and nephews and many friends. A special thank you to Diane and Mike and the staff of Diane’s Place in the Northwoods, the Hospice Staff of Ascension, Father Ron Serrao, the St. Peter’s Eucharistic Ministers, Rick and Marsha who faithfully administered Communion on Tuesdays and stopped in to visit and pray with him. Thank you to everyone who helped in the care and thoughtfulness of our Uncle Jim. – The Wierichs Family A Mass of Christian Burial will held at 11:00 AM on Friday, October 25, 2019 at St. Peter the Fisherman in Eagle River, with visitation one hour prior to the Mass at the church. Interment will be at St. Peter’s Cemetery in Eagle River. Luncheon following cemetery at St. Peter’s Catholic Church.

The family of James W. Wierichs created this Life Tributes page to make it easy to share your memories.

Send flowers to the Wierichs family.