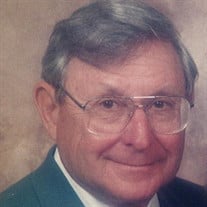 James Robert Keuer, M.D. 1928 - 2019 James Robert Keuer passed away quietly at his home in Minocqua on June 12, with his loving wife, Jean, at his bedside. Jim was born to Emma and Walter Keuer in Chicago on May 27, 1928. Being such a kind and empathic young man, his parents hoped he would become a minister; however, Jim chose to serve others in another capacity and began in pre-med education at the University of Illinois. He graduated in 1954 from Chicago Medical School, interned at the Milwaukee County Hospital, and completed his residency at the Veterans Administration Hospital in Wood, Wisconsin. He was a respected surgeon and was a Fellow of the American College of Surgeons. Jim married JoAnn Schlegl on June 26, 1954, and they had six children during their 27 years of marriage. As a busy surgeon, Jim’s time with his family was precious, and the family could often be found on the ski slopes when Jim had days off. He and JoAnn were very social and had many good friends in the Medford community. In 1981, Jim moved to Minocqua and joined the Marshfield Clinic. There he married Jean, the love of his life. He adopted Jean’s daughter Sarah when she four years old. Jim and Jean built a house on the lake and spent many days boating; in particular, they enjoyed boating to Bosaki’s after dinner for hot fudge sundaes. One cannot talk about Jim’s life without acknowledging the impact he had on so many people’s lives. He was a highly respected member of the medical community. He was a skilled and dedicated physician, even so far as spending numerous nights in the hospital to ensure his patients received the highest quality of care. He touched their souls, as well as treated their bodies. Retirement opened up a new world for Jim to enjoy life. He had a lot of fun with his grandchildren, boating, fishing, riding horses at Circle M, visiting Beer Can Island, dinners, and overnight stays. These experiences with his grandchildren opened Jim’s heart even wider with his own children, who he adored. Jim bought “Gertrude”, his Ford Model A, in 1986 and participated in many car tours and meeting other car enthusiasts. He and Jean traveled a great deal together throughout their marriage, but more so after retirement. However, their favorite place was to be at home, enjoying a nice glass of wine and having interesting conversations about the human spirit or their shared interest in medicine. They spent many days on the golf course. They loved listening to music in the evening and dancing; they especially enjoyed the many years they attended the Viennese Ball. He has now joined his parents, Emma and Walter Keuer, sister Betty, sons Paul and Peter, sister-in-law Julie, and many of his special long-time friends. He is survived by his wife Jean, son and daughters: James F. Keuer (Carolann); Janet Lucchesi (Mike); Patty Bates (Mike); Carol Gaab (Pat); Sarah Keuer (Clarence) and 11 very special grandchildren, and 8 great grandchildren. A Memorial Service will be held at 11:00 AM on Saturday, June 15, 2019 at Bolger Funeral Home, Woodruff Chapel, with visitation one hour prior to the service at the funeral home.

James Robert Keuer, M.D. 1928 - 2019 James Robert Keuer passed away quietly at his home in Minocqua on June 12, with his loving wife, Jean, at his bedside. Jim was born to Emma and Walter Keuer in Chicago on May 27, 1928. Being such a kind... View Obituary & Service Information

The family of Dr. James Keuer created this Life Tributes page to make it easy to share your memories.

Send flowers to the Keuer family.