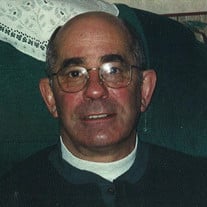 James (Jim) Kellner was welcomed into the arms of his Lord and Savior, Jesus Christ, on June 28th, 2019. He died at HYMC, where he had been in ICU for almost a week. Jim was almost 83, born Sept. 9, 1936 in Chicago Illinois. He was the second oldest of 8 siblings. He grew up on Altgeld Street in Chicago and attended St. Josephat’s Catholic School and then Trinity High School, where he graduated in 1950. From there he enrolled and then graduated from a Chicago Tech School, and then working for a time at an Insurance Company, and also as a Sergeant in The National Guard Reserves for three years. He then answered a calling to join a religious community called The Alexian Brothers, and as a novice, he spent 2 years on the Community’s farm in Gresham, WI, developing a love for Wisconsin that never died. Jim graduated from the Alexian Brothers School of Nursing and as an RN, he worked at Boys Town in Lincoln, Nebraska, and also spent time on Signal Mountain, in Tennessee. Jim then left the community in 1967 returning to the Chicago area and began to work at Holy Family Hospital as a surgical nurse. It was there that another surgical nurse arranged for Jim to meet his future wife, Mary Anne, also a former Nun and a surgical RN, who had worked there but had left the convent recently. They met on August 15th, 1968, married 8 months later on April 12th, celebrating 50 yrs. together this past April 2019. Together they became born again believers while still living in Illinois. Both were Baptized in a Woodruff Lake and until his death, Jim loved his Lord and Savior, knowing that he would spend his eternity with Him. Jim was a die hard, life long Chicago Cubs and Bears fan; he was passionate about his teams. Jim is survived by his wife, Mary Anne and 3 children, Michael (Sally), Jay, and Daniel (Kelley). They are blessed with four Grandchildren: Nate, Stephanie, Austin and Easton Kellner. A year and a half ago they became great-grandparents to Stormy, their 1 &1/2 year old Great Granddaughter. Jim is also survived by his oldest brother Les (Gerry), his sisters Mary Ann (George), Geraldine (Walt), Cathy, & Pat (Tim) and numerous nieces and nephews. He was preceded in death by his parents Les and Matilda, Brothers John and Bob, and many aunts and uncles and cousins. A funeral will take place on Tuesday, July 2nd at Saint Germain Evangelical Free Church in Saint Germain, WI, beginning with a viewing at 11 AM until 1PM, followed by a celebration of Jim’s life and then burial in the Saint Germain Cemetery. A luncheon, provided by the church will follow at the church.

James (Jim) Kellner was welcomed into the arms of his Lord and Savior, Jesus Christ, on June 28th, 2019. He died at HYMC, where he had been in ICU for almost a week. Jim was almost 83, born Sept. 9, 1936 in Chicago Illinois. He was the second... View Obituary & Service Information

The family of James F. Kellner created this Life Tributes page to make it easy to share your memories.

James (Jim) Kellner was welcomed into the arms of his Lord and...

Send flowers to the Kellner family.