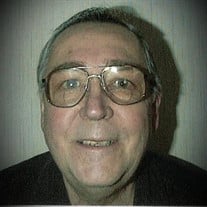 James “Jim” J. Bilke, 86, of Eagle River Wisconsin passed away peacefully on December 18, 2021 at Marshfield Hospital in Marshfield.  Jim was born in Milwaukee, Wisconsin on September 10, 1935 to Herbert and Mary E. Bilke.  While living in Milwaukee, Jim and his young friends spent time working on and building their “Hot Rods”.  Jim always loved being around cars and operated a gas station which at that time still had a dirt floor.  He gave away the Sunday paper to entice people into the station and build up his business. As a young man Jim served in the United States Air Force specializing in security. Jim moved to Mukwonago, Wisconsin and began working at American Motors Corporation.  He became the supervisor of Industrial Engineering until the plant closed and then continued his career with Chrysler Motors until he retired in 1989.  Jim really enjoyed his many years in the automotive industry. After retiring Jim moved to Sayner, Wisconsin for a few years then moved to Eagle River.  He was an amateur Ham Radio operator for years.  Jim enjoyed hunting, fishing, and traveling as well as watching and going to car races and shows.  Jim was an avid fan of Wisconsin sports, especially the Green Bay Packers which he prided himself on being a great “armchair coach”.  Jim belonged to Ducks Unlimited and Whitetail Unlimited in which he enjoyed going to their banquets.  He was also a member of the Saint Germain Prime Timers and enjoyed the activities and travel that he did with the group. Many can agree that Jim was a very hard-working man.  While living in Eagle River he worked part-time in construction, bartending and at the Pamida and Shopko stores.  Jim was preceded in death by his parents and son, Scott.  Jim is survived by his wife Dana and her two children Joyce Daun (Jeff) of Mesquite, Nevada, and Kelly Adams (Susan) of Janesville, Wisconsin; Jim’s daughters Lori Prochniak (Kevin) of Port Washington, Wisconsin and Lynn Dybul (Jay) of West Bend, Wisconsin.  Grandchildren Andryw, Michael and Zoey of Janesville, Wisconsin and Amanda, Andrea and Adam of Port Washington, Wisconsin and Taylor and Zachary of West Bend, Wisconsin, and Great-granddaughter Adalyn of Port Washington.  Jim will be greatly missed by all.  A Celebration of Life will be held on May 14, 2022 at Bolger Funeral Home in Woodruff at 12:30.

The family of James J. Bilke created this Life Tributes page to make it easy to share your memories.

Send flowers to the Bilke family.