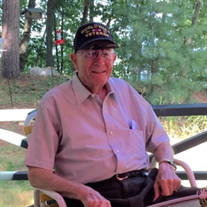 Irvin Adam Feit passed away at LakeShore Assistant Living in Lake Tomahawk on May 4, 2020 from Dementia. He was born in Knowlton, WI on August 19, 1923 to Fred and Agnes Feit. Irv graduated from Mosinee High School and spent two years beyond in Wausau to become an English teacher. He entered the Army during WWII and served in England, France, etc., and was awarded a Purple Heart. (He went on the first Wisconsin Honor Flight.) Irv met and then eloped with Helen Jean Mechelke (of Wausau) on December 13, 1946. They built a house in Wausau where Irv worked alongside Jim Kryshak as an expert watch repairman before moving to Mosinee and opening Feit’s Jewelry Store. They had a son Dennis and a daughter Lois. A change in career brought Irv to become a Rural Mail Carrier until his retirement after 30 years. During this time Irv was very active in the Rural Carrier’s Association of Wisconsin where he held various positions including president. He was also active in the National Carriers Association traveling all around the United States which provided vacation times for the whole family. After retirement Irv and Helen built a home in Manitowish Waters on Three Stepping Stones Lake. They became snowbirds in the winter to enjoy the warmth of the Florida sunshine. January 9, 1990 Helen passed away from Lou Gehrig's disease. Irv then met up with a past school mate (Elsie Strozinski) and were married August 17,1990. When chores began to be taxing, they moved to PrimRose Assisted Living complex in Wausau until Elie’s passing on April 3, 2016. Irv moved back to the northwoods area to LakeShore Assisted Living in Flambeau and later to Lake Tomahawk until his death. During Irv’s lifetime he formed the first Kiddy Parade in Mosinee, was a member of the Lions Club in Mosinee and later in Manitowish Waters, and was a Master Mason for 65 years and Past Master for Mosinee Masonic Lodge. He preceded his Masonic journeys with a dual membership to Hurley Lodge after his retirement up north. He was a member of Eastern Star and held the office of Worthy Patron at the side of his wife Helen, (Worthy Matron) for several different years at Forest Lodge 130. Irv was a 32 Degree Scottish Rite Mason and belonged to the Ancient and accepted Scottish Rite of the Eau Claire, WI Valley. Irvin loved to travel, hunt, fish, camp, and work with his hands. Irv made his own folding camping trailer as well as constructing a little, unique northwoods shack on his land in Manitowish Waters, and carved and creative many elegant figures with his favorite being “shoes.” One carving earned him “people’s choice” award. He attended numerous Muskie Tournaments in Manitowish Waters, but ice fishing was his favorite...he loved those delicious, big crappies. Irv taught many family members and friends how to waterski, loved dancing the waltz and polka, and loved all of this family members. With the twinkle in his eyes and a funny quick wit about him the grandchildren enjoyed their time together. He will be missed!! Survived by his son Dennis Feit (Lisa Meyer) of Menomonie, WI, daughter Lois Bauers (Henry) of Manitowish Waters, Wi, three grandchildren: Dr. Heidi Jahnke DVM (Adam) of Trevor, WI, Dr. Andrew Feit Ph.D. (Carlyn Kuchan) of San Francisco, CA, William Pronath (Tiffany) of Menomonee Falls, WI, four great-grandchildren: Mason, Myles, Wilson and Lydia Pronath. Also, a special foreign exchange student “son” and his family (Dr. Oscar Saravia MD, wife Leonor, children Oscar Jr., Claudia, Maria and Gustavo). In addition: many nieces and nephews. Deceased before Irv were: his father Fred Feit, mother Agnes Feit, two brothers, and their wives: Raymond and Catherine Feit, Marvin Feit and Ruby France, and many aunts and uncles who mostly lived beyond their 90’s A small family graveside service was held at Pinelawn Cemetery in Manitowish Waters and a celebration of his life will be held sometime this summer, once COVID-19 restrictions are lifted.

Irvin Adam Feit passed away at LakeShore Assistant Living in Lake Tomahawk on May 4, 2020 from Dementia. He was born in Knowlton, WI on August 19, 1923 to Fred and Agnes Feit. Irv graduated from Mosinee High School and spent two years beyond... View Obituary & Service Information

The family of Irvin A. Feit created this Life Tributes page to make it easy to share your memories.

Irvin Adam Feit passed away at LakeShore Assistant Living in...

Send flowers to the Feit family.