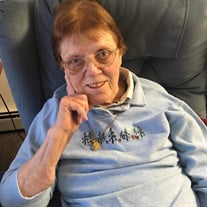 Alice Irene Boudreaux went with the angels to heaven on March 3, 2020. During her lifetime, Irene impacted the lives of thousands of people worldwide as a friend and mentor. She will be dearly missed, but she will not be forgotten as we take with us the many life lessons she taught us, the love she so freely gave, and the wonderful memories of time spent together. Irene was born March 26, 1928, in Lutcher, Louisiana. She was called “Sis” by her four older brothers, Claude, Robert (Marion), Riley (Freck), and George (Lois), all of whom predeceased her. She was also predeceased by her mother, Alice Baker Boudreaux, her father, C. T. Boudreaux, Sr., step-mother, Jane Boudreaux, grandmother, Maude Palmer Baker, and aunt, Irma Baker. She is survived by the second wife of her brother Riley, Emily Boudreaux, and numerous nieces and nephews and their children to whom she was lovingly known as “Aunt Sis.” Irene graduated from Southwestern University in 1949 with a Bachelor’s Degree in Health, Physical Education and Recreation. She belonged to the Sorority, Alpha Sigma Alpha. Following her graduation, she taught Physical Education, Civics and coached the first girl’s basketball team at Lutcher High School, positions she held until her retirement in 1970. Under “Coach’s” guidance, the Lady Bulldogs’ team adored her and worked hard to achieve great success, leading them to the state finals. In 1954, Irene was hired as a camp counselor and tennis instructor by Richard and Helen Wittenkamp, founders of Red Pine Camp for Girls in Minocqua, Wisconsin. Irene began a lifelong friendship with the Wittenkamps and their daughter, Sarah Wittenkamp Rolley. Irene returned to work at the camp every summer from 1954 to 1970. In 1970, Irene and Sarah became the Camp Directors and moved to the camp on the shores of Clear Lake where they remained until it was sold in 2007 after 70 years of family operation. Irene was loved and admired by the campers, counselors, and other employees, many of whom still visited her often, called and wrote letters. Although Irene never had children, she loved and was loved by Sarah’s children who called her “Rere” and survive her. Robin Thies (Jim) of Arbor Vitae, Wisconsin, and Grant Rolley (Susan) of Jasper, Alabama. Sadly, she was predeceased by her dear friend, Sarah Rolley in 2009 and Sarah’s parents, Richard and Helen Wittenkamp. It was Irene’s wish to issue a heartfelt thank you to her caregiver, Mari Temby, and to all her friends, for the wonderful and loving job they did in caring for her. A special thank you to all of the staff of Milestone, where Irene happily resided since October 12, 2013. A long time favorite camp song, “May Red Pine” was composed by Irene to the tune of “Edelweiss.” These special words will continue to be sung joyfully in her memory and honor. May Red Pine, yours and mine - Always keep us together. Bring us peace, perfect peace - Courage in every endeavor. Reach out your hand and be my friend, be my friend forever. May Red Pine, yours and mine - Keep us together forever. The family requests that donations be made in her memory to the Sarah Wittenkamp Rolley Camper Scholarship Fund: Red Pine Camp Attention: Connie Scholfield PO Box 69 Minocqua, WI 54548 Memorial services will be held for our forever friend, Irene Boudreaux, at Red Pine Camp at a later date.

Alice Irene Boudreaux went with the angels to heaven on March 3, 2020. During her lifetime, Irene impacted the lives of thousands of people worldwide as a friend and mentor. She will be dearly missed, but she will not be forgotten as we take... View Obituary & Service Information

The family of Irene Boudreaux created this Life Tributes page to make it easy to share your memories.

Alice Irene Boudreaux went with the angels to heaven on March...

Send flowers to the Boudreaux family.