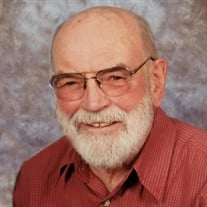 Hollis Jerry “Hop” Reich, died Sunday, August 22, 2021, a month short of his 90th birthday and almost 10 years to the day after his beloved wife Sally. He was born in Fort Atkinson, Wisconsin on September 8, 1931, to Ralph and Mary Reich. Hop attended Fort Atkinson High School, where he met Sally Gene Kurtz, and he graduated in 1949. Hop entered the U.S. Navy after high school, and since enjoyed telling stories of his adventures aboard a goodwill ship which sailed the globe. He and Sally were married in 1954 and spent their first few months together in California where Hop completed his Navy career. They moved back to Fort Atkinson and established Reich Electric, Inc., which kept him busy from 1963-1979. They then fullfilled their dream of retiring to their vacation property, making it their home, on Lake Katherine, near Hazelhurst, Wisconsin. Hop was a star athlete in high school and instilled a love of sports and the outdoors in his children. He was a Boy Scout leader for over a decade, and once served as president of Hoard Curtis Scout Camp in Cambridge, WI. In northwoods retirement, he honed his interest and skill in woodcarving. He designed and carved numerous waterfowl sculptures, duck decoys, shorebirds, songbirds and intricate tree leaves which he often gifted to others. He also taught woodcarving courses, sharing his love of the craft, at Nicolet College for many years. Hop will be missed by friends and family. He is survived by son Scott Reich of Waunakee, WI, and daughters Holly Schmucki of Eagle River, WI, and Janet Shepler of East Thetford, VT. Memorial services will be private. Memorial gifts may be made in his name to Ascension Lutheran Church in Minocqua.

The family of Hollis Jerry Reich created this Life Tributes page to make it easy to share your memories.

Send flowers to the Reich family.