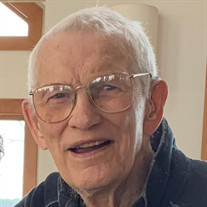 Everybody thought Hank Levihn would keep fishing and hunting forever. But all good things must come to an end. Dr. Henry Leonard Levihn, more commonly known as Hank passed away with a clear view of Big St. Germain Lake on Valentine’s Day. He was 92 years old. Born in Indianapolis, IN., on January 7, 1930 to Carl and Hilda (Hartwig) Levihn, Hank moved as a youngster with his family to Beloit, WI. It was in Beloit the mischief began: six brothers are never more than an arm’s length from adventure…or trouble. Hank fondly recounted growing up in the family home on Prairie Avenue, whether shooting his BB gun out the window at squirrels, picking fruit from the orchard in their yard, or heading over to the Pop House for a banana split with extra chocolate sauce, nuts and whipped cream, a concoction so commonly asked for by Hank and his brothers it became listed on the menu as, “The Levihn Special”. Armed with a paper route and a thriving nightcrawler business, Hank was a savvy kid who was always active. Activity parlayed into a passion for athletics, of which no one would argue, Hank was a natural. Inducted into both the Beloit College Hall of Fame and the Beloit Historical Society Athletic Hall of Fame, he had a decorated sports career, lettering in wrestling, football and track at Beloit High School; playing three semesters of football at UW-Madison, where he also wrestled “in the Red Gym” as a walk-on; eventually transferring to Beloit College to be reunited with his high school coach and lifelong mentor, Carl Nelson. Hank truly shined back in his hometown, lauded as, “The finest tackle to ever play at Beloit College.” In 1952, Hank led both offense and defense, helping secure the Buccaneers their first undefeated season in 61 years. Hank earned a Little All-America distinction and was the only small-college player named to the first-team Phi Kappa Psi All-Fraternity Squad. By1953, the year he graduated, Hank had won all 13 of his wrestling matches and captured the Wisconsin AAU Title as heavyweight champion. As if that wasn’t enough, Hank was invited to tryout for the Green Bay Packers—an honor of which he was quite proud. Instead, he chose to attend dental school. After serving in the Army Reserves during the Korean War, Hank received his D.D.S. from Marquette University School of Dentistry and his M.S. in Orthodontics from Indiana University. He began a private orthodontia practice in Janesville, meticulously straightening the smiles of thousands of teenagers and adults alike. Along the way, Hank met two very special females: Beverly Borgia and her daughter, Brenda. This trio united, officially, on December 28, 1963. Eventually, David and Ann rounded out the family of five. When Hank wasn’t working hard, he was playing hard. His list of professional and recreational affiliations is endless: Janesville Noon Rotary Club, Janesville Y’s Men, American Dental Association, the International Association of Orthodontics, Ruffed Grouse Society, Ducks Unlimited, the UW-Madison “W” Club, and more. He was also a longtime member of St. Mark’s Lutheran Church in Janesville. Hank and Bev loved to travel, most often to family homes in Colorado, South Carolina and “up north” to St. Germain, but the pair traveled internationally as well, highlighted by a European honeymoon, separate trips to Austria, England, and Canada; and a special visit to Indonesia to see Hank’s eldest brother, Ed. More than anything, however, Hank was an outdoorsman. His storied adventures fishing and hunting—whether with friends, his brothers or solo—are legendary. If you met Hank and had any interest in casting a rod or shooting a rifle, you’d be at his side in no time, gleaning tips from a true expert. With an uncanny ability to recall detail, Hank could describe the direction of the wind, the depth of the water from which he pulled his 52” musky or equally massive walleye, or how many birds his dogs flushed on a random Saturday in 1978. His narratives were epic, no matter the subject. At age 90, Hank took his last trip to a deer stand, and up until recently, walleye fished his favorite lake. Hank will also be remembered for his dedication to family and friends; his generosity; his hearty laugh; an unlimited capacity to eat cake with extra frosting and any flavor of ice cream; his love of popcorn and macadamia nuts; and his unwavering dedication to the Badgers, the Brewers, the Bucks and the Packers. Hank is survived by his daughter, Brenda Levihn (Michael Hissong) of Cedar Rapids, IA; son, David Levihn (Suzie Milbauer) of St. Germain, WI; Ann Levihn (Bill Karls) of Madison, WI; grandchildren: Avery Schiefelbein, Kelly Schiefelbein (Michael Wixom), William “Connor” Levihn, Caroline Levihn and Max Levihn-Karls; great-grandchildren Tyler Schiefelbein, Caylon Schiefelbein and Anthony Schiefelbein; numerous beloved nieces and nephews, and three sisters-in-law: Dena Levihn, Jackie Levihn and Jean Levihn. Hank was preceded in death by his wife Beverly; his parents; and his brothers: Paul (“Ed”), Richard (“Rook”), John (“Johnny”), William (“Billy”), and Arnold (“Arnie Baby”) and his sister-in-law, Nancy Levihn. A private family celebration is planned for this summer in St. Germain. In lieu of other expressions of sympathy, donations may be made to the Alzheimer’s and Dementia Alliance of Wisconsin at http://alzwisc.org or 6314 Odana Road, Suite 4, Madison, WI 53719.

Everybody thought Hank Levihn would keep fishing and hunting forever. But all good things must come to an end. Dr. Henry Leonard Levihn, more commonly known as Hank passed away with a clear view of Big St. Germain Lake on Valentine&#8217;s... View Obituary & Service Information

The family of Henry L. Levihn created this Life Tributes page to make it easy to share your memories.

Everybody thought Hank Levihn would keep fishing and hunting...

Send flowers to the Levihn family.