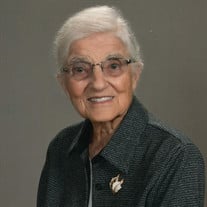 On Sunday Oct. 21 2018 Helene I. Sleight was called home, at the age of 93. She was born Helene Kisser June 6 1925 In Pewaukee WI she grew up on her parents farm and graduated from Pewaukee High School in 1944. During the summers and after graduation she would travel north to work at Deer Park Lodge and then at Voss’s Birchwood Lodge where she met her husband Richard Sleight they were married in 1949. They purchased a small resort on the channel between Spider and Stone Lakes which they owned until they purchased Island Lake Log Cabins in 1954. Together they built and rebuilt cabins that now make up Sleight’s Wildwood. Which she ran until only a few years ago when her son’s took over operation of the resort. When she wasn’t cleaning cabins, cutting the grass, or painting at the resort she took cooks positions at Voss’s and also the Barnstormer restaurant to make ends meet. Her favorite thing to do though was work her gardens. There were always vegetables but her passion was flowers and she always enjoyed sharing her work with others and arranging flowers for the church altar. Her pride was her family she would always have to tell how proud she was of her boys, and you never had to guess about what she was thinking. Her opinion and her thoughts she would share openly with whoever she spoke too, and almost all would agree with her in the end. Helene was one of the last people who saw the area for what it was and as it was. She was preceded in death by her husband Richard and her brothers William and Edward Kisser and sister Loraine Pionkowski. She is survived by her sisters Rose, Anne, and Esther. Her sons Richard (Shelly), Michael (Terry), Ronald (Terri), Russell (Judy), and Daniel (Anya) and Grandson Daniel. Services will be held at 11:00 A.M. at Trinity Lutheran Church in Minocqua on Saturday 27, 2018. A visitation will be from 10:30 A.M. to the time of the service. In lieu of flowers, memorials may be directed to the church

On Sunday Oct. 21 2018 Helene I. Sleight was called home, at the age of 93. She was born Helene Kisser June 6 1925 In Pewaukee WI she grew up on her parents farm and graduated from Pewaukee High School in 1944. During the summers and after... View Obituary & Service Information

The family of Helene I. Sleight created this Life Tributes page to make it easy to share your memories.

Send flowers to the Sleight family.