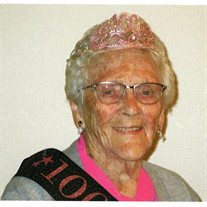 &#8220;God&#8217;s love is greater than we can ever imagine&#8221; Helen J. (Prideaux) Wentz whose goal was to celebrate her 100th birthday, which she did on September 5, 2021, was called to her heavenly Mansion Just Over the Hill Top on January... View Obituary & Service Information

The family of Helen J. Wentz created this Life Tributes page to make it easy to share your memories.

“God’s love is greater than we can ever imagine”

Send flowers to the Wentz family.