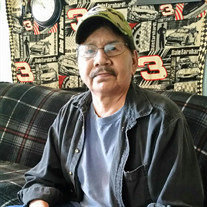 Guy Anthony Soulier, (Ozhaa-waash), began his final journey on Sunday, May 13, 2018 at Howard Young Medical Center in Woodruff, Wisconsin with his loving family at his side. Guy was born on November 5, 1961 in Woodruff. He was the son of Mary Ella St. Germain and the grandson of Peter St. Germain. Guy attended the Lac du Flambeau Public School where he excelled in wrestling. He also attended Flandreau Indian School where he became known for his boxing abilities. After finishing school, he became a trophy winning boxer in the Wisconsin Golden Gloves arena Guy was a kind-hearted man. He loved his family and enjoyed spending time with them, especially his grandchildren and many nieces and nephews. Guy was an avid fan of the Packers, Badgers, Brewers and Nascar. You could usually find him in front of a TV during these games. Guy is survived by a son Robin Soulier Sr. of Lac du Flambeau, daughter Delayna Donnell of Red Lake, MN and daughter Linnea Soulier of Albuquerque, NM. He is also survived by grandchildren, Ninde, Robin Jr., Ashton, Raiden, Kasi, Bob Jr.; Lyle, David and Kodiak. Further survived by brothers and sisters, Wallace Soulier of Lac du Flambeau, Raymond (Lisa) Soulier of Lac du Flambeau, Mardella (Mike) Gustafson of Bayfield, Alice (Ben) DeVerney of Lac du Flambeau, Teana (David) Clark of Ponemah, MN and Theresa Soulier of Lac du Flambeau. Guy was preceded in death by his beloved grandson Nolan Anthony Soulier, his mother Mary Ella St. Germain, grandfather Peter St. Germain, sister Madeline (Tiny Girl) Soulier, and a niece Mary Madeline Soulier. Guy will be missed by his family and many friends. “We will miss you Brother-Man.” Traditional Native American Services will be held from Wednesday May 16, 2018 after 4 Pm until Thursday May 17, 2018 at the Multipurpose building in Lac du Flambeau. Burial will be in the Memorial Cemetery in Lac du Flambeau. Bolger Funeral and Cremation Services of Minocqua and Woodruff is serving the family. www.bolgerfuneral.com

Guy Anthony Soulier, (Ozhaa-waash), began his final journey on Sunday, May 13, 2018 at Howard Young Medical Center in Woodruff, Wisconsin with his loving family at his side. Guy was born on November 5, 1961 in Woodruff. He was the son of Mary... View Obituary & Service Information

The family of Guy A. Soulier created this Life Tributes page to make it easy to share your memories.

Send flowers to the Soulier family.